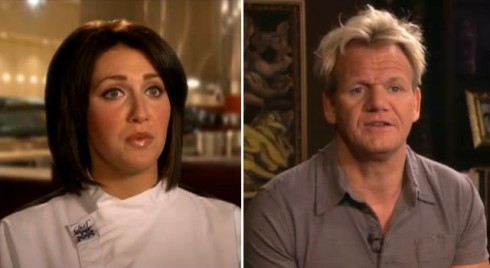 The soul-sucking fate of having to endure chef Gordon Ramsay’s profanity-laced tirades is bad enough, but imagine what it would be like if you won and were STILL denied your promised dream job!  Welcome to the world of poor Holli Ugalde, winner for season 7 of Hell’s Kitchen.

The prize for winning the show was supposed to be a 6-month run working alongside Ramsay at the super swanky soon-to-reopen Savoy Grill at London’s famous Savoy Hotel.  So what’s the fu*&ing problem here?!?  Well it looks like Holli was denied a work visa by the Home Office, the agency in charge of immigration for Britain.   As of this post there has been no specific reason provided for the denial.

Ugalde, a 25-year-old single mom was obviously upset with the situation.  She stated that she was:

“Incredibly excited when I won and felt crushed when I found out I wouldn’t be going to London.  It is deeply disappointing that I will not be working at the Savoy Grill.”  She added that, “Winning Hell’s Kitchen was a great experience but I cannot go to London. I have been so fortunate in all the opportunities that have come up since winning Hell’s Kitchen and I am excited about my future career as a chef’.”

The endlessly profane Ramsay took the cowardly celebrity way out and let a spokesman do his talking for him in regards to the situation.  Ramsay’s rep stated that:

“In spite of our best efforts, we were unable to obtain a work visa for Holli to fulfill her prize at the Savoy Grill in London. Holli elected to receive the cash prize instead.”

Well maybe Holli will be better off in the long run not having to suffer at the hands of Ramsay again.  She is going to get that cash prize and has already announced that she has been named the signature chef at Fort Lauderdale’s B Ocean scheduled to open next month.