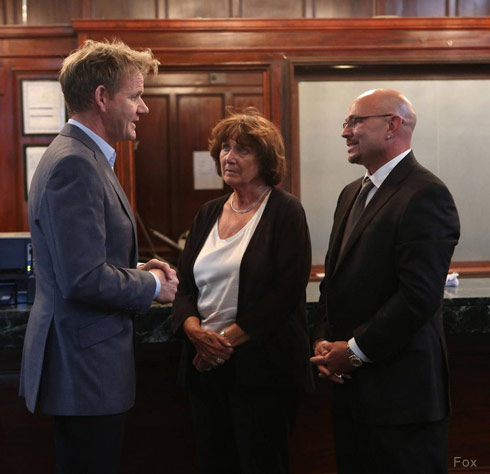 On tonight’s episode of Fox’s Hotel Hell, Gordon Ramsay travels to Longview, Washington to try to rescue the historical Monticello Hotel. In addition to the usual (dirty) laundry list of issues including unclean rooms, a bad menu, marquee misspellings, and shoddy furniture, Gordon also has to deal with hotel owner Phillip Lovingfoss (seen on the right in the photo above), who reportedly has a drinking problem and was arrested for DUI right outside the hotel the night before filming began!

The incident went down on June 5, 2013. According to the police report, Lovingfoss was driving towards 15th Avenue on Broadway when police noticed he failed to use his turn signal. Lovingfoss was pulled over by police in the Monticello Hotel parking lot, only yards away from the trailers of the Hotel Hell production crew.

Lovingfoss admitted to drinking one beverage and “had a strong odor of an alcoholic beverage,” according to officers on the scene. He was taken to Cowlitz County Jail where he registered blood-alcohol levels of .093 and .095 percent, which were just above the 0.08 percent legal limit.

According to The Daily News Online, “Lovingfoss spent the night in jail and appeared in court Thursday morning, where bail on the misdemeanor charge was set at $1,000, according to court records.”

In a preview clip for the Monticello Hotel episode of Hotel Hell, Gordon Ramsay says, “The wealthy owner has a drinking problem and it’s spiraling out of control,” before adding, “I have to get this hotel back on the wagon before it’s too late.”

Here’s another preview clip in which Phillip’s girlfriend, and the Monticello Hotel general manager, Ginger Allred opens up with Gordon about Phillip’s serious alcohol problem:

According to a network press release about Hotel Hell Season 2, this episode will also feature an intervention.

I can’t say whether or not the intervention was successful, but it appears as though the “inn”tervention had mixed results.

According to The Daily News back in March, “the hotel reopened with a pared down and more upscale menu, but the changes upset some longtime customers. The restaurant, lounge and banquet facilities abruptly closed January 1, without notice to employees or customers. The hotel, adjacent motel, apartments and offices remain open.” 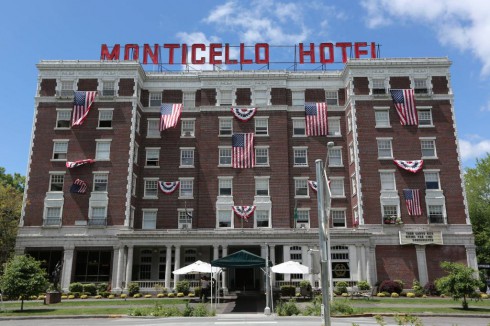 The building’s apartments, office rentals, hotel rooms and adjacent motel remain open. Lovingfoss has said he hopes to rent the restaurant and bar, but would consider a sale if he found an owner who would respect the history of Longview’s first major building.