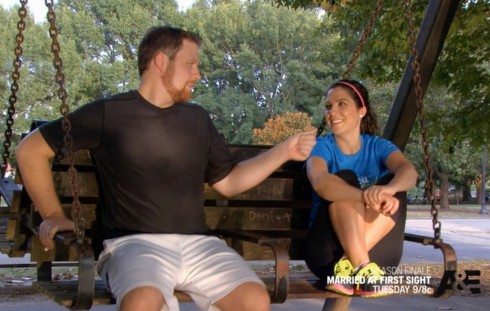 UPDATE: Additional information about David’s arrest including the full police report have been revealed. Click here for all the details including the violent allegations against him.

By all accounts, David Norton appears to have good intentions for participating in Married at First Sight. He is unyielding in his commitment to his wife and remains eternally optimistic that his marriage can be successful.

Throughout this process however, David admits that he and his wife Ashley Doherty have “faced some heat since the show began airing.”

“People are looking to find dirt on me,” David confessed after speculation began that he has a criminal background.

The 30-year-old confirmed rumors of an arrest record to People but maintains it was an innocent misunderstanding. David insists he’s not a violent person, and the situation was blown out of proportion.

I was arrested when I was 21, after I got into a loud fight with my brother when I caught him with my girlfriend. I smashed a phone in anger. … I was cited for disorderly conduct, and I ended up attending one two-hour class. Neither my girlfriend nor my brother ever filed charges, and I was never convicted of any crime. I was young and stupid – it’s something that I deeply regret and it isn’t something that I’m proud of.

David went on to explain that he has since reconciled with his brother and his ex and reassured us he would “never hurt anyone.”

A quick online search turned up an arrest record for David Norton in Peoria, Arizona. The citation was, just as David said, for disorderly conduct. Even though he’s from Buffalo and currently resides in Atlanta, his LinkedIn profile puts him in the Peoria area in 2007. 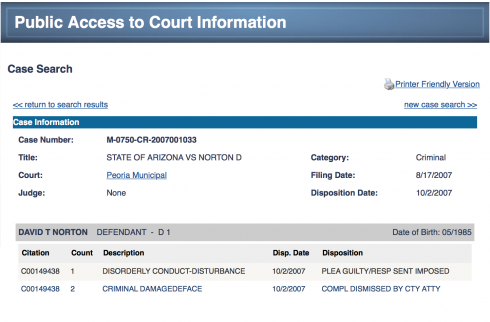 The case records show the incident occurred in or around August of 2007 and was cleared up by June of 2008.

David’s case went seven years without any activity until June of 2015 when a “Records Request” was made. Could that have been the producers of Married at First Sight doing a background check or perhaps Ashley or even her family? The records request was filed almost the exact same time the couples walked down the aisle.

Regardless of the severity of the charges made against David, these types of claims don’t bode well for the show’s reputation. Remember last season when a restraining order was filed against one of the show’s participants?

Ashley has also been targeted for her past prior to appearing on reality TV.

Accusations have been running rampant that she joined the show because she was broke and looking for a way to make her ex-boyfriend jealous. Viewers point to Ashley’s lack of engagement as a clear sign she’s not in it for a real commitment.

Be sure to catch part 1 of the Married At First Sight season finale, airing Tuesday, February 23 at 9/8c on A&E.