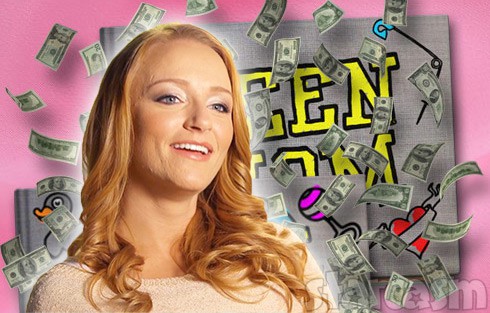 Even though she’s one of the most recognizable MTV reality stars, Teen Mom OG‘s Maci Bookout says her celebrity status hasn’t translated to a big fortune.

“Reality TV can make you very famous, but you basically get the sh*t end of the deal: Everyone knows your name and talks about you, but there’s no red-carpet prestige or glamorous piles of money,” she said in an excerpt from her upcoming book, Bulletproof, shared by Radar Online.

Maci continued: “Once you become a so-called reality TV star, people immediately think you’re a high-end celebrity and you travel the world and have a mansion and so much money and all these other things they associate with having your face on television.”

Maci, who is reportedly filming a sixth season of Teen Mom, claimed her life “isn’t that much different from what it would have been without MTV.” She explained, “I still live in Chattanooga and go to Wal-Mart and buy bread and milk.”

Throughout Teen Mom‘s time on the air, there have been varying reports about how much the stars earn. The most reliable account comes straight from Amber Portwood, who testified in 2012 that she earned $140,000 per six-month contract with MTV. The ladies likely negotiated even bigger salaries for Teen Mom OG. In Bulletproof, Maci said she supplements her MTV earnings by getting paid to promote brands on Twitter and Instagram. In fact, she said she “took to it so well” so she is pursuing a career as a social media specialist.

Despite those profits, Maci’s legal history seems to support her claim she doesn’t have a huge savings account: It was reported last year that she still owed the IRS nearly $80,000 from the 2011 tax year.

The Richest estimates Maci’s current net worth is $10,000.

Bulletproof comes out on July 21.