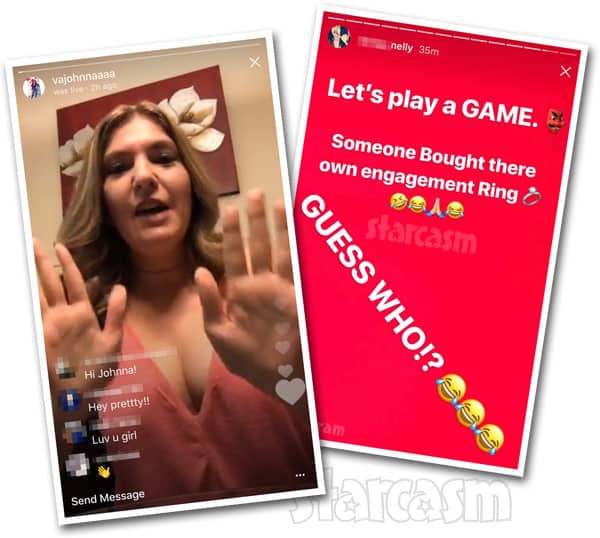 The on-screen drama has been mounting before the Season 1 finale of WE tv’s Love After Lockup later tonight, but it may just pale in comparison to some of the off-screen drama between Johnna DiGrigoli, her #hotfelon prison bae Garrett Tanner, and his ***SPOILER ALERT*** strip club bartender girlfriend “Natural Nelly!”

As a very brief recap, everything started after photos and videos of “Natural Nelly” surfaced on Garrett’s Instagram feed a few weeks ago. Johnna angrily responded on Twitter by declaring: “I low key want this ‘natural’ girl to pop on Garrett’s story again so I can give her the attention she really deserves. ?” Nelly didn’t pop on Garrett’s IG, but he popped on hers in a series of video clips with Nelly and her daughter.

That’s when Johnna gave Nelly “the attention she really deserves” by posting Nelly’s mug shot photo from a recent drug arrest in Tampa! Johnna also revealed that she found out about Garrett’s new bae because Nelly gave police Johnna’s address as her own when she was arrested! Johnna started receiving Nelly’s mail, and after Nelly skipped out on her court hearing and a warrant was issued for her arrest, Johnna got a visit from police looking for her. 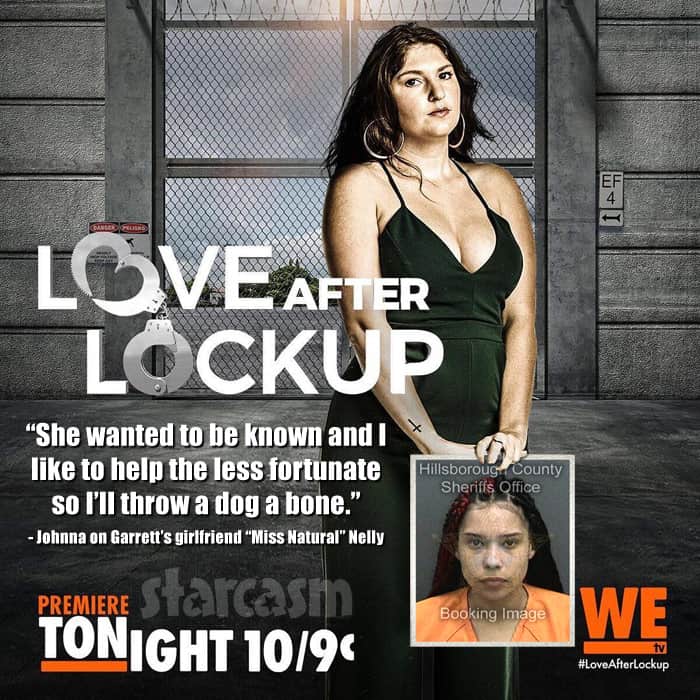 Since then, the two gals have been going after each other with all sorts of allegations and — of course — screen capped text messages as well as an actual hand-written (and hand-written well!) apology letter from Garrett. In the course of this back and forth, Johnna admitted that she played ball with a few guys while Garrett was in prison, but she insists none of them ever made it to home plate.

Nelly responded by claiming that it is much more difficult to get her to play with boys’ bats and balls. “Always want to call a stripper a hoe ??” she shared in a text graphic. “Never have I ever had to F**k or suck for money ?Y’all know Hoes got 9-5s too right? ?” She adds in smaller text: “Ask him how long it took to get this kitty Lol I’m Stingy with My ??” I’m not sure how many weeks it took Garrett to get Nelly’s ??, but I can guarantee it took longer for him to get Johnna’s ??! Like, years longer!

Nelly then posted a series of additional text graphics which read: “Let’s play a game. Someone bought there [sic] own engagement ring. Guess who?!”

All of this was a bit too much for Johnna, who took to Instagram for a live stream session last night to explain everything, before heading out for a Thursday night on the town with friends. She says that technically, at this point, it could be said that she bought her own engagement ring, but that’s due to the fact that Garrett purchased it with a line of credit that was under her name “because Garrett can’t get credit because he’s a loser.” Johnna says that Garrett stopped making payments, so now she is responsible for the balance. She reveals that she plans to sell the ring anyways, so it will all be moot soon.

Johnna also shared bit more about the story of how she found out about Nelly in the first place. She had mentioned previously that she was receiving mail for Nelly at her address, which I thought was all because Nelly provided police with Johnna’s address when she was arrested. But, it seems Nelly and Garrett were attempting to apply for a car loan together, and all of those rejections were going right to Johnna’s house too!

Johnna says that she ignored the mail for the most part, but one day her dad was over and he opened one of the letters. Apparently Nelly is just as stingy with the money she owes as she is with her ?? because Johnna says the letter indicated that Nelly’s credit score was 355!

Natural Nelly responded with a thickly accented video clip pointing out that her credit rating doesn’t mean anything because she pays cash for everything. Here are her exact words:

OK. Thank you for clearing that up Nelly.

Back to Johnna’s live stream… She addressed Garrett’s announcement that he and Nelly will be going live on Instagram after the Love After Lockup finale with her usual humility, admitting that whatever Garrett and Nelly are going to claim may have some truth to it, but she knows it won’t be the whole truth.

Johnna returned to the main message of her live stream, which was expressing her frustration and hurt over Garrett being willing to allow his girlfriend of a few months to drag Johnna online after Johnna stood by him for YEARS when no one else would.

She also emphasizes that this all started because of photos and videos posted on Garrett’s account. “Instead of just shutting the f**k up and letting the show run its course, you let your girlfriend take your phone and post stuff online and ruin the show,” Johnna said, adding that she only responded after Nelly continued to post stuff online. (I’m guessing Johnna caught some heat from WE tv and show producers for revealing the spoilers.) She points out that if Garrett and Nelly had just waited until after the finale tonight, it could have just been a situation where “this is Garrett’s new girlfriend or whatever.”

Johnna says in the clip that she just wants to move on, but Nelly bashing her — and Garrett being OK with it — is just too much not to react. “He’s literally using the fame I got him to bash me,” she says just before tears begin to flow. She forces herself to stop crying and mentions again that it is just hurtful that Garrett would allow her to be bashed like this after she stuck by him for so many years.

“So I let a guy kiss me, and let a dude touch my boobs and stuff, whatever!” she said of her alleged cheating.

Johnna eventually regains her composure completely and tries to take the high road by pointing out that Garrett was actually a great boyfriend for a while. She even says that Garrett won her dad over eventually! “I don’t want anyone to think that I hate Garrett, because I really don’t,” Johnna confesses. “I just don’t want to have anything to do with him ever again.”

When asked about her “Garrett” tattoo, Johnna called it “one of the biggest mistakes of my life” and says she plans on having it removed or covered up soon. She later posted a photo and talked about it more on Instagram: 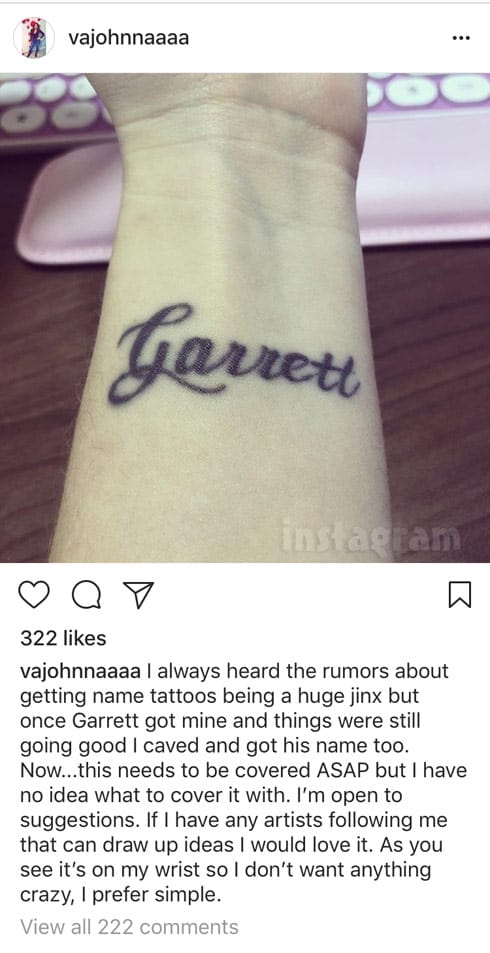 Meanwhile, Nelly has taken to threatening “punk a** b*tch” Johnna, going so far as to mention the street where Johnna works. “Or should I pull up to your job off [street name],” Nelly wrote at one point during her multiple text graphic rant.

Thank you to everyone who is sending me screenshots of the threats. It’s one thing to talk badly about me online but to threaten to harm me and put my address out there like that? Lines have been crossed.

I have to admit that I have become a HUGE Johnna fan — mostly from seeing how she has handled all of the off-screen drama. She is quick to admit her own faults, which is a rarity, and despite obviously being hurt pretty badly, she is able to maintain a sense of humor as well. Meanwhile, Natural Nelly is over here pretending like she’s the star of Love & Hip Hop Tampa with Garrett just counting down the days before he is back in prison hoping someone like Johnna will write him a letter. Or, as their Mormon Love After Lockup co-star Andrea would put it, those two are acting like ganguh bangers. Needless to say, they have not won me over.

Please note: NONE of this takes away from the excitement for tonight’s season finale episode of Love After Lockup! How much of the Johnna and Garrett (and Nelly) break up drama will be shown? And what are the fates of the other couples?! Tune in to WE tv at 10/9c to find out!