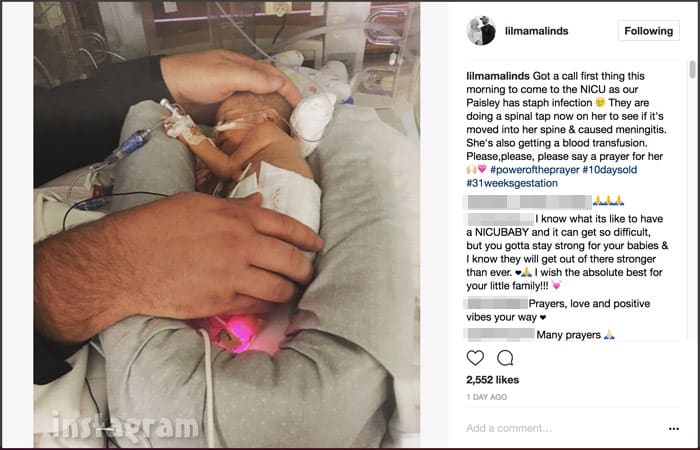 Former 16 & Pregnant star Lindsey Nicholson gave birth to twins last week after a very difficult pregnancy, and, although her little boy and girl arrived early, it appeared as though the major health risks had been avoided thanks to the extra few weeks in the womb. But Lindsey revealed this weekend that her daughter Paisley has been diagnosed with a staph infection, and she asked her followers for prayers as doctors prepare to test Paisley for meningitis.

“Got a call first thing this morning to come to the NICU as our Paisley has staph infection,” Lindsey wrote on Saturday, along with the photo of Paisley above. “They are doing a spinal tap now on her to see if it’s moved into her spine & caused meningitis. She’s also getting a blood transfusion. Please,please, please say a prayer for her???” Lindsey ended with the #poweroftheprayer #10daysold and #31weeksgestation hash tags.

Prior to getting the call from the doctors on Saturday, Lindsey shared some more positive updates on her twins. From October 30: 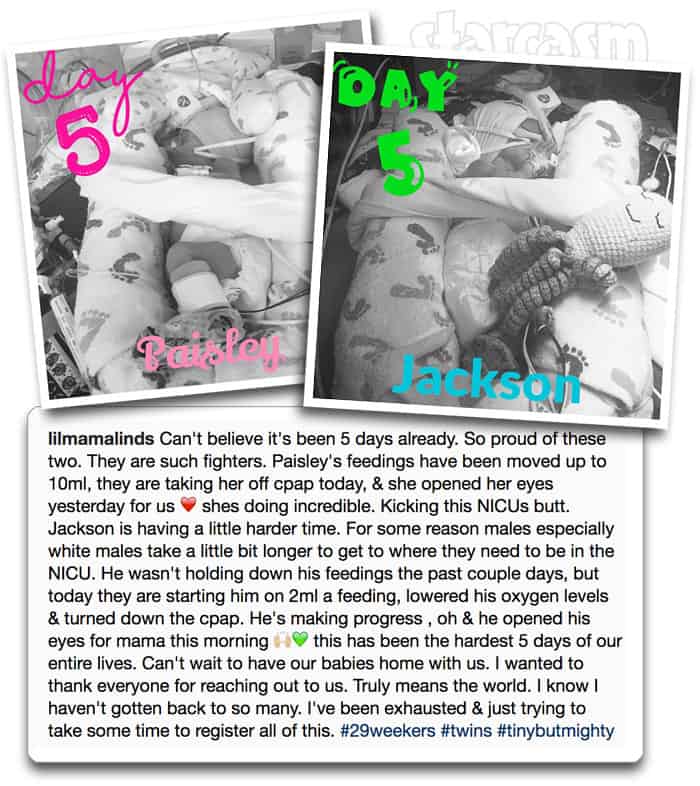 And an update on Jackson from November 1 (photo not included):

Im one week old today. I’m officially breathing on my own like sister & off Cpap? my eyes are blue/green like mama, & my hair is brown like daddy. I’m one happy boy when my parents hold me? #GODisGREAT #3lbsofPerfection

On Friday, Lindsey posted about her excitement over another new addition to the family: “So ready to move into our new home,” she tweeted. “Can’t wait to decorate the nursery ??” Hopefully, Paisley’s tests are positive and Lindsey, husband TJ, and big sister Aniyah can once again focus on getting the twins set up in their new home!

UPDATE – Lindsey has revealed that her son Jackson is also having difficulties in a new post:

Paisley’s blood cultures have now been positive 3 days in a row. The antibiotics are not working. They are giving her stronger doses and different kinds in hopes they can kill the infection within the next day or two. Thankfully the meningitis hasn’t gone to her brain or heart.

Jackson- has now been diagnosed with E.Coli & Staph infection that has turned into meningitis as well. They are doing a head & heart ultra sound on him to see if it’s gone to either places. I can’t even put into words how we are feeling right now. Our hearts hurt. We are angry. We feel broken. I don’t understand why our babies have to go through this. Please keep praying.

Today we received the first bit of good news about the twins since 5 days of constant bad news. Both of them had a Negative blood culture today!! Meaning.. antibiotics are working and have finally started killing the infections. Now we still need 5 days of straight negative blood cultures to be in the clear and 14 days of antibiotics but this a great turn for the both of them. Everyone’s prayers have truly worked??

We have continued the updates in a new post here, including the ones above plus more recent ones from Lindsey.