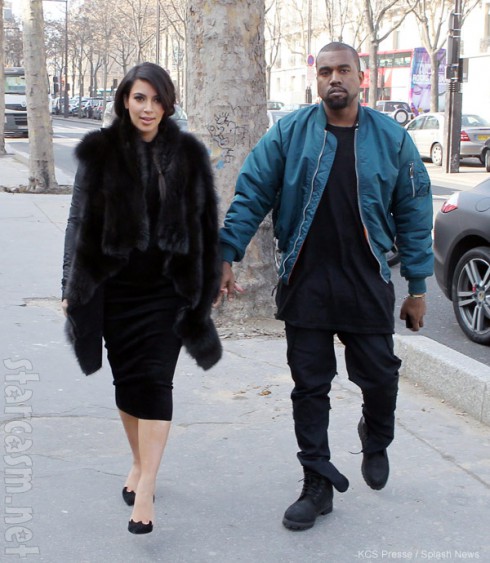 Kim Kardashian was in tears as she was rushed to her doctor Tuesday night in Los Angeles. The pregnant reality star was fearful she was having a miscarriage after feeling ill on the plane trip back from Paris, where she had joined the baby’s father Kanye West for Paris Fashion Week. (In the photo above, taken in Paris on Monday, Kim and Kanye take a stroll on their way to lunch.)

“Kim started feeling ill on the plane from Paris, and called friends as soon as she landed,” an insider tells the New York Post. “She was rushed to her doctor Tuesday night in tears. She thought she was having a miscarriage.”

According to the source, Kim returned home at 12:30AM after her doctor determined there was nothing serious wrong. But, Kim was reportedly told to slow things down a bit. As evidenced by her many trips and the numerous paparazzi photos of her constantly at the gym, Kim seems to be constantly on the go — something her doctor says needs to stop.

“Kim’s not respecting her pregnancy,” a source tells Page Six. “She’s running around, working out seven days a week. She’s working with two different trainers to control her weight, including Tracy Anderson and a pregnancy trainer.”

The 32-year-old Kardashian is reportedly worried about her million-dollar figure, especially with the media continually commenting on her growing size since becoming pregnant.

“She’s scared that her ass is as big as a couch and is going south,” the source adds. “But she is having a very rough pregnancy, and doctors have ordered her to slow down.”

So far all has been quiet from Kim on Twitter, with the last tweet coming nine hours ago (which would have been about three hours before Kim reportedly returned home from the doctor), and it was Kim simply remarking on her fashion choices with a link to a photo of herself. “Mugler coat with Chloe slacks… love this travel look! http://bit.ly/wxprd1” she wrote.