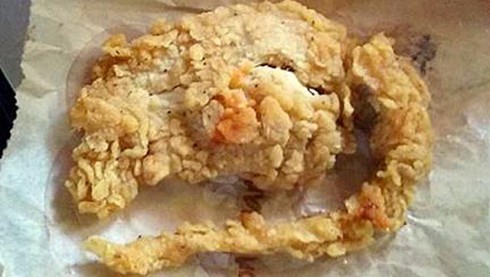 Earlier this month, California security guard Devorise Dixon made international headlines when he shared a video of his three-piece chicken meal from KFC and claimed that one piece was actually a Kentucky Fried Rat.

“WENT BACK TO KFC YESTERDAY AND SPOKE TO THE MANAGER SHE SAID IT IS A RAT AND APOLOGIZED, IT’S TIME FOR A LAWYER,” he added on Facebook the next day. Dixon also said he went to the hospital. (I guess he filmed the video, took pictures and then decided to actually eat it?) “BESAFE DON’T EAT FAST FOOD !!!”

After his Facebook posts went viral, KFC contacted Devorise’s lawyer, who agreed to turn the (uneaten?) sample over for DNA testing at a third-party lab. The results recently came in and… The “rat” was just some funny looking chicken. (Shocking, given Devorise’s solid story, right?)

In a statement, KFC officials had the following to say:

Recently, a customer questioned the quality of a KFC product, and this received considerable publicity given the sensational nature of his claim. The product has now been tested by a third-party independent lab, which confirmed it is definitely a piece of chicken, as we knew all along. The right thing for this customer to do is to apologize and cease making false claims about the KFC brand.

A spokesperson for the company told The Business Insider they are considering “all options” at this point, possibly including a defamation lawsuit. So, even though the food wasn’t a rat, it doesn’t sound like Devorise will be eating at KFC anytime soon.

Family: Texas woman who died while getting black-market butt implants was ‘hooked on booty shots’