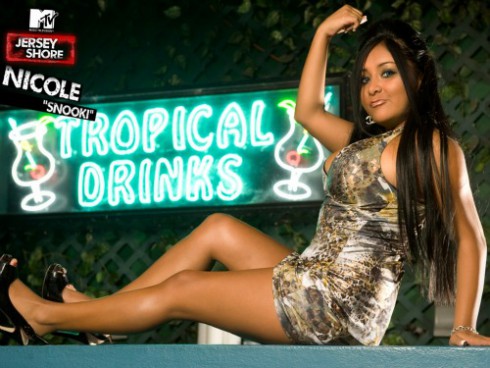 These days, Nicole Polizzi is the embodiment of a fit mom. But, back when she rose to fame on MTV’s Jersey Shore in 2009, “Snooki” was better known for her antics. On the surface, much of her behavior seemed to be caused by the excessive amounts of alcohol streaming through the house. However, Nicole now says what really made her act “stupid” was her poor diet.

“Although I was consuming thousands of calories a day during the party years, I was actually starving myself of healthy food. The more crap I ate, the stupider I got, as seen on Seasons 1 through 5 of Jersey Shore,” Nicole said in her new book, Strong Is the New Sexy: My Kickass Story on Getting my ‘Formula for Fierce,’ as excerpted by Yahoo! “When I stopped drinking and started eating lots of greens, whole grains, and lean meats, it was like my brain woke up from a five-year coma.”

Nicole said that after she began eating better, she immediately began making better relationship and career decisions. She explained, “What goes into your body comes out in your life. If you want success, love, and the strength to cope with anything life throws at you, feed your body the healthy food it needs.”

I'm feelin like a beast after today's work out! I'm gonna get shredded this winter! @anthonymichaelfit #motivated

Although the food and alcohol didn’t help her judgment, Nicole admitted to Yahoo! that she really played up the Snooki “character” for the hit MTV show — which is why she now wants to go by her given name. “I kind of always went by Nicole, but the brand was Snooki,” she explained. “I didn’t mind that on Jersey Shore, because that was the character I was playing, but now I don’t really play that character anymore.”

Nicole’s new book, Strong Is the New Sexy: My Kickass Story on Getting my ‘Formula for Fierce’ is available now.

Jwoww wants her naked photos back from Tom Lippolis