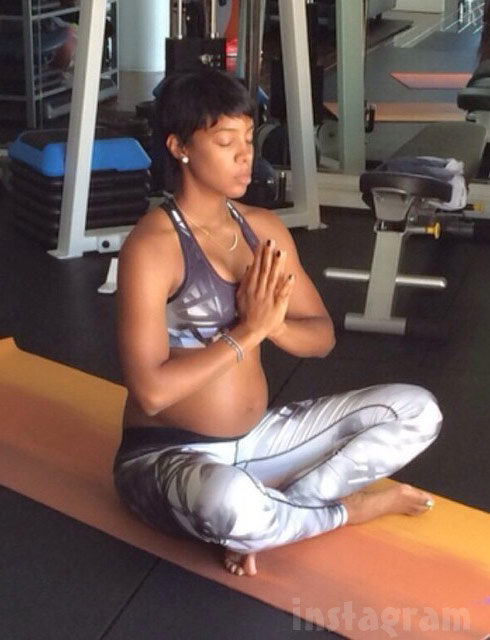 Last week former Destiny’s Child singer Kelly Rowland all but confirmed she is pregnant with husband Tim Witherspoon’s baby by posting a clever photo of two pairs of Air Jordan sneakers — one man-sized and one infant-sized — along with the caption, “I’ll be stuntin like my daddy…..” Today Kelly cleared up any remaining doubts that she is expecting with a photo of herself in the “forward facing baby bump” yoga position.

That Kelly decided to pose for the photo while doing yoga should come as no surprise after the 33-year-old revealed to Us Weekly, “I’m in love with boxing and yoga right now. It just feels good, it’s really empowering. I just feel like I’m getting my little strength back and getting my little jabs in, she said. “I think that nothing should change whether it comes with your age or whatever. I think you should always do what you love to do.”

Kelly may be needing the calming effect o yoga more than ever given the last couple months! In addition to finding out she is pregnant, Kelly married Tim Witherspoon in Costa Rica in May and recently reunited with former Destiny’s Child members Beyonce and Michelle Williams for the latter’s “Say Yes” music video. In case you missed it, here’s the video:

No word yet if Kelly Rowland’s Destiny’s Grandchild is a boy or a girl, though given the initial Air Jordan’s announcement, I think most are leaning towards a boy.

Congratulations to Kelly Rowland on her pregnancy, marriage and reunioning!