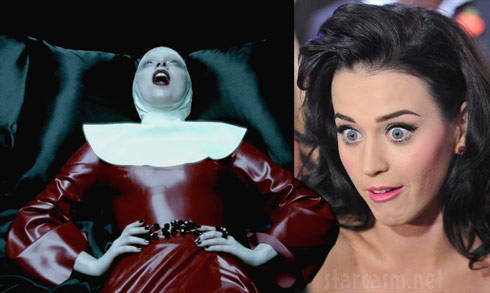 “Using blasphemy as entertainment is as cheap as a comedian telling a fart joke.”

In case you haven’t seen it yet (CLICK HERE to watch the video and see tons of still images), Gaga’s latest surreal short film features a lot of Christian imagery, including a red latex habit (nun duds), rosary bead consumption, an outfit featuring a red cross pointing to LG’s crotch and a Madonna costume (both of them).

As you probably know, Katy Perry started her career as a Christian artist. Her debut album was a self-titled gospel album from back when her self title was Katy Hudson. When that didn’t seem to work, Perry started wearing revealing, sexy outfits and singing songs like “You’re So Gay” and “I Kissed A Girl.” It’s good to know that Katy’s free spirit and joyfully in-your-face sexuality draws a line in the sand between “I Kissed A Girl” and “I Kissed A Nun.”

Personally I think this is just a clever ploy by Katy to drum up a little controversy. If you read her tweet carefully you’ll notice that she doesn’t say using blasphemy as entertainment is necessarily bad, just that it equates to a comedian telling a fart joke. I can’t imagine that someone seriously dating Russell Brand doesn’t like a good fart joke now and then!