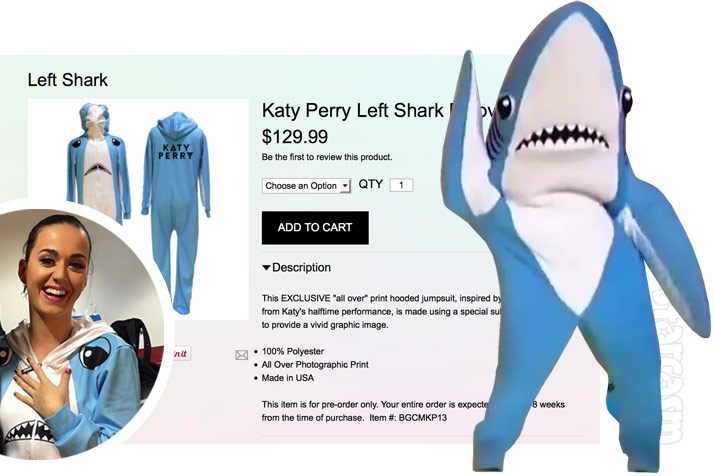 Are you one of millions of Super Bowl viewers who instantly identified Katy Perry’s free-spirited fun-finned dancing partner as your one true spirit animal? Now you can match your exterior appearance with your inner spirit courtesy of the OFFICIAL Left Shark onesie, available now through Katy’s website!

Knowing full well that the reveal of such a jawstrulescent deserves something out of the ordinary, Katy Perry made the announcement via Twitter with a bit of humor:

ATTENTION INTERNET: NO LONGER DO YOU HAVE TO DIY LEFT SHARK COSTUME LIKE THIS GUY: pic.twitter.com/s5RjIa4RiC

The Left Shark onesie if called a “Belovesie” on the site and is described this way:

This EXCLUSIVE “all over” print hooded jumpsuit, inspired by the “Left Shark” from Katy’s halftime performance, is made using a special sublimation technique to provide a vivid graphic image.

100% Polyester
All Over Photographic Print
Made in USA 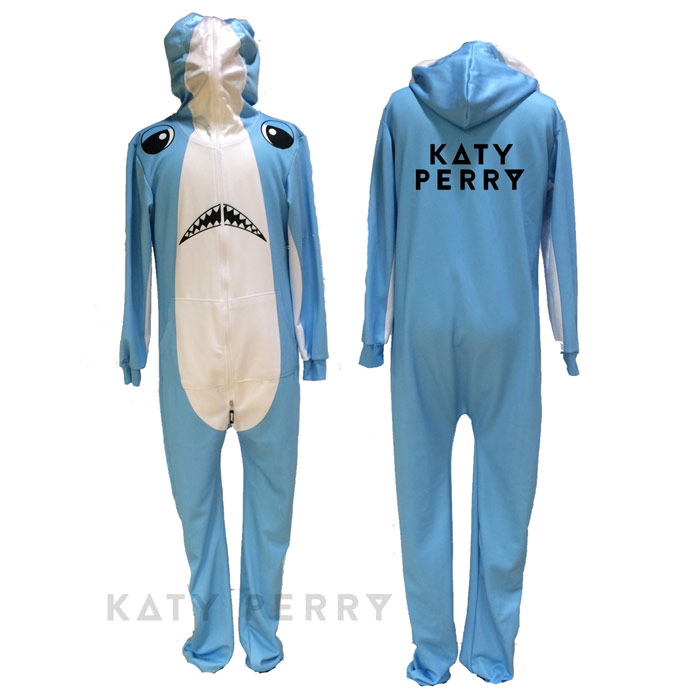 And don’t think for a second that Katy Perry would be selling something that she hadn’t tested herself first! Here she is sporting the Left Shark Belovesie last month showing that it is perfectly capable of containing a whole lot of awesomeness:

The photo also demonstrates the joy-inducing power of Left Shark — something even a tough guy like Arnold Schwarzenegger cannot resist.

My only question is, why did they decide to make it gold and white? 😉

* It should be noted that the site states, “This item is for pre-order only. Your entire order is expected to ship 6-8 weeks from the time of purchase.” Bleh. That sure seems mighty Right Shark of them.

Coco and her boobs as an orange-haired nurse and Ice-T as Dr. Stein at Heidi Klum and Seal’s 2010 Halloween party