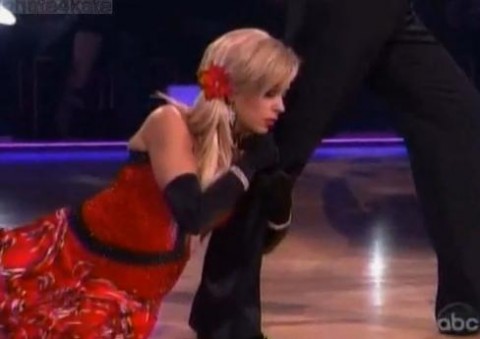 Last night everyone’s most hated mom and dancing novice, Kate Gosselin, strutted to Lady GaGa’s “Paparazzi” during her third week at Dancing With The Stars.

Unlike most of the other contestants Gosselin was never a trained entertainer, let alone a dancer. Considering that on the top of the fact that she’s in an emotionally insecure place because of a very public divorce and a very public brood of children. Of course, she’s not going to be artfully and emotionally expressive. Of course, she’s going to be stiff as a board on the dance floor.

This week her partner Tony Dovolani dealt with Kate’s challenges on the dance floor by including some very odd theatrics and dragging her around the dance floor whenever possible. The rest of the time, as the judges noted, it looked like she was merely walking. But she was tarted up really well and as  Bruno Tonioli  pointed out, had a “b!tch from hell look on her face.” Credit is due where credit is due.

Kate said that the song “Paparazzi” could “really be her dance” because it reflected a lot of what’s been going on in her life. It really looked like some kind of wacky performance art.

Meanwhile, back in Pennsylvania, Jon Gosselin was drawing up a lawsuit to seek full custody of the kids! Think what you want about Kate Gosselin, but at least she out there hustlin’ to pay for those eight kids.