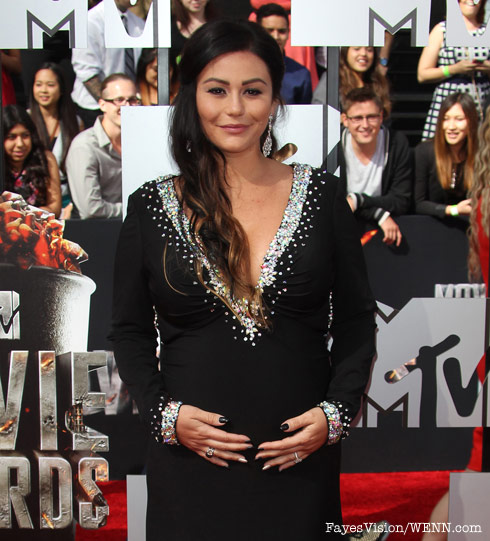 Pregnant Jersey Shore alums and gtlbffs JWoww and Snooki hit the red carpet yesterday for MTV’s Movie Awards and both chatted up their delicate friggin’ states etc during the appearance.

Us caught up with the dynamic duo and they were their usually candid selves as they discussed being expecting mothers at the same time:

JWoww: “She [Snooki] loves being pregnant right now and I f**king hate it. I’m not a fan of pregnancy right now with my thighs touching and my boobs changing but I know it will be worth it and hopefully I get back to that really quickly.”

Snooki: “I know she [JWoww] is going to be a great mom. She took care of me for four years on Jersey Shore. The whole labor thing she is really nervous about but anybody is nervous about that.”

JWoww indicated that she already has a few names picked out to choose from for her little Jersey girl and that the spice we all came to know via the show is alive and (literally) kicking. “Its funny because Roger will lay his head on my stomach and she will just drop kick him right in the ear. It’s cute. He gets to feel it. Once we found out we were having a girl, he lost half his hair and he aged 20 years.”

So will these reality moms let their little guidos and guidettes watch reruns of JS some day? JWoww answered, “When they’re 25.” Snooki added,”I don’t mind. I did it before them so they can’t judge but then they are going to come back and say, you did it, why can’t I? That’s what I’m scared of!”

Sammi & Ronnie are buying a house in New York; in talks for spin-off