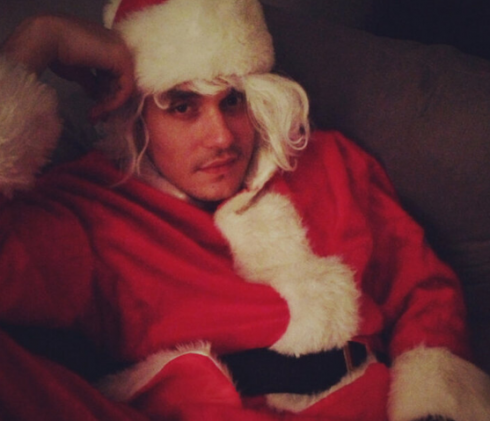 Is 35-year-old playboy John Mayer changing his ways? For a while he was running through all the girls in Hollywood, and following up with less than respectful interviews about them.

In 2010 he received a great deal of backlash for saying Jessica Simpson is like “sexual napalm,” and “crack in the sack.” Taylor Swift wrote a song that is allegedly about him, and while Taylor denied that “Dear John” is about the singer, he said the song humiliated him nonetheless.

(Taylor Swift has written high-profile, thinly-veiled songs about so many famous men, they must have created a support group by now. Taylor’s Exes Non-so-anynomous.)

In an interview with CBS Sunday morning set to air February 10, John admits “I was a jerk.”

He’s taken some time off from being in the public eye to recover from having granulomas removed from his vocal chords, but he tells CBS News that the hardest thing was to recover from all the bad interviews and press. Since he’s had some time to reflect, he now seems more laid back. “It’s very liberating when you finally realize it’s impossible to make everyone like you,” he says “I wanted everybody to like me. I thought I was one shuck and jive away in every direction.”

In a recent interview with Rolling Stone, Mayer told them that he was “quite happy” with his current relationship with Katy Perry. He also explained that photographers used to freak him out to the point where he thought they were invading his brain, but he’s now more relaxed about being snapped by the paps. “I mean, I used to be incredibly put off by somebody taking a picture, thinking as if in some way it was it was invading my brain,” he says. “But all it is is you can see where I was last weekend. That’s all. So now you got a picture of where I was last weekend. That’s not tremendously frightening to me.”

John also told The Rolling Stone that his voice has changed since having the surgery, and there’s a risk the granulomas could come back. It sounds like John has been through a lot these past few years, and it has seemed to have changed him for the better.

In other John-and-Katy news, the pop star isn’t going to take John to the Grammy Awards. Instead she’s taking Girls actress Allison Williams.