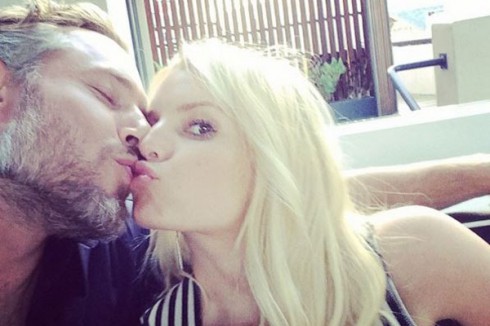 Jessica Simpson and Eric Johnson got married Saturday, July 5 at the San Ysidro Ranch in Montecito, California in front of 250 guests. The pop star fashion mogul and NFL started dating in early 2010, and got engaged a few months later. The wedding kept getting put off, mostly because Jessica kept getting pregnant. In 2013 Jessica joked to Jay Leno “We’ve had two different wedding dates, but he keeps knocking me up. We’re doing it very backwards!”

There are no photos released yet, but the bride wore a pale pink Carolina Herrera gown. (CLICK HERE to see a sketch of the gown.) The couple’s one-year-old son Ace was the ring bearer, and two-year-old daughter Maxwell was the flower girl escorted by her cousin, Ashlee Simpsons’ five-year-old son Bronx.

“We are overwhelmed with complete happiness and love having made our eternal commitment,” the couple said in a statement to People magazine. “To say ‘I do’ in front of family, friends and, most importantly, our children has been the happiest moment of our lives.”