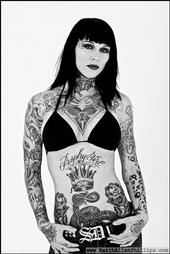 The woman who rocked Sandra Bullock’s world yesterday in a tell-all InTouch Weekly interview not only is a tattoo model, an adult web chat girl, and a runaway with a Amish background, but she also goes by the stripper name Avery at San Diego’s Pure Platinum Kerany Mesa Club, but hasn’t shown up to work lately.

She’s worked at at least one other Sand Deigo Platinum club and was fired from Larry Flint’s Hustler Club, an employee told Radar Online, though they didn’t reveal the reasons behind the termination.

Want to know more about Michelle “Bombshell” “Avery” McGee? CLICK HERE to catch up on all the updates.