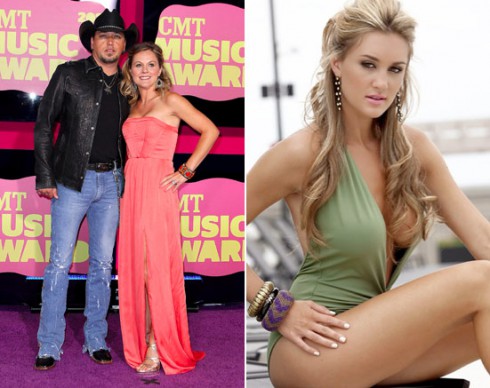 Jason Aldean may be married, but that didn’t stop him from engaging in a steamy cuddle session with a former American Idol star at a Los Angeles bar over the weekend. Now that the booze has worn off, he’s having to face the music and explain what the heck he was thinking.

TMZ had originally posted the photos of him and American Idol‘s Brittany Kerr (top -right) at The Den and in addition to their canoodling, they also appeared to be exchanging a kiss or two. Jason had been in town over the weekend for a performance and with his wife and children at home, he was free to play. Only problem with that plan was that The Den is a popular celebrity and tourist hang out and paparazzi frequent the place.

Now that the world has seen his indiscretions first hand, he has issued a statement:

Hey Guys – I wanted to talk to you directly, so you were hearing the truth from me and not just reading allegations made about my personal life on gossip web sites. The truth is that I screwed up. I had too much to drink, let the party get out of hand and acted inappropriately at a bar. I left alone, caught the bus to our next show and that’s the end of the story. I ultimately ended up embarrassing my family and myself. I’m not perfect, and I’m sorry for disappointing you guys. I really appreciate being able to work through this privately with my family and for all your continued support.

That may have been the end of his night, but something tells us this story isn’t over — at least when it comes to his relationship with his wife. Jason wed his high school sweetheart Jessica Ussery in 2001 and the couple has two children together. This news, and his apology, likely won’t sit well with her.

So far, no word from Brittany… But I think an old country song might sum it up: