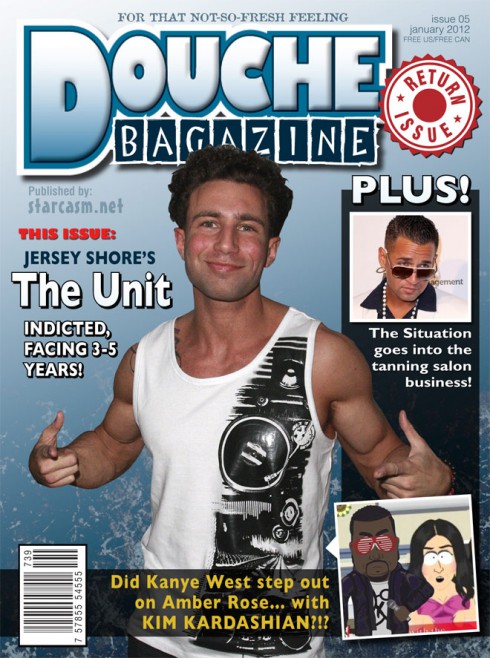 It appears as though Jersey Shore‘s curly-headed walking six-pack known as “The Unit” is in a bit of a “situation.” The Unit (real name Jonathan “Jonny” Manfre, 32) was arrested back in July when Seaside Heights Police found him in possession of a white powdery substance that turned out to be Ketamine, a dissociative anesthetic sometimes used as a date rape drug. Radar Online is now reporting that Manfre has been charged with felony drug possession and if convicted faces 3-5 years behind bars.

The Unit and the details of his arrest have inspired me to resurrect the starcasm.net exclusive publication, Douche Bagazine. Let’s all take a moment to express our thanks to The Unit for this momentous occasion!

Other stories in this month’s “Return Issue” include The Unit’s buddy Mike “The Situation” Sorrentino officially getting into the tanning business by partnering with Boca Tanning Club in Florida as well as Amber Rose’s shocking announcement that Kanye West cheated on her with none other than Kim Kardashian!

And for those of you curious to find out more about The Unit’s drug of choice, here is the 411 on Ketamine from DrugFree.org:

Ketamine is a dissociative anesthetic developed in 1963 to replace PCP and currently used in human anesthesia and veterinary medicine. Much of the ketamine sold on the street has been diverted from veterinarians’ offices. Ketamine’s chemical structure and mechanism of action are similar to those of PCP.

Although it is manufactured as an injectable liquid, in illicit use ketamine is generally evaporated to form a powder.

Ketamine is odorless and tasteless, so it can be added to beverages without being detected, and it induces amnesia. Because of these properties, the drug is sometimes given to unsuspecting victims and used in the commission of sexual assaults referred to as “drug rape.

Ketamine can cause dream-like states and hallucinations. Users report sensations ranging from a pleasant feeling of floating to being separated from their bodies. Some ketamine experiences involve a terrifying feeling of almost complete sensory detachment that is likened to a near-death experience. These experiences, similar to a “bad trip” on LSD, are called the “K-hole.” Low-dose intoxication from ketamine results in impaired attention, learning ability, and memory .In high doses, ketamine can cause delirium, amnesia, impaired motor function, high blood pressure, depression, and potentially fatal respiratory problems.

Original photo of The Unit: WENN.com

Has The Situation had plastic surgery? Is he going to prison for tax evasion?