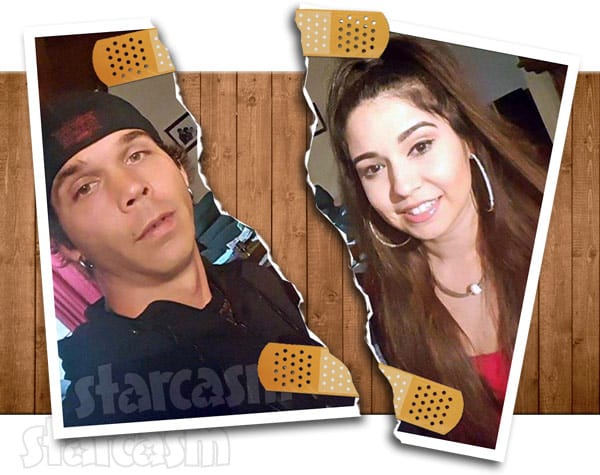 It’s officially over between Return To Amish couple Jeremiah Raber and Carmela Raber. Jeremiah posted a video today in which he reveals that he “finally got smart” and kicked Carmela out, ending a tumultuous 15-month marriage that included Jeremiah’s domestic violence arrest in April and numerous public scuffles on social media.

Jeremiah live streamed the announcement on Periscope in a video he titled “I finally did it.”

“I finally, finally got smart,” Jeremiah says at the beginning of the video. “I will no longer be told that I cannot have Periscope, I cannot have Peeks, Instagram, Snapchat, my fan page — AND, you will not disrespect my kids,” he continues emphatically. “As of today, half an hour ago, I am single as f**k. I told her to get the f**k out of the house. I’m done with her! No more! We’re going through a divorce, I’m proud to say. I stood up and kicked her out. I can no longer deal with it.” 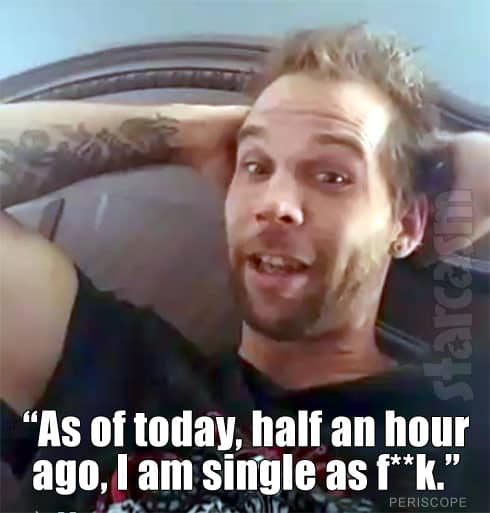 Jeremiah then brings up his arrest. “As far as this court sh!t, where me laying my hands on her? A lot of that was — well, I mean some of it was — I was wrong for doing some of it, but some of it was not true…I have pictures, I have video of her hitting me. I have pictures of her destroying the house. I never put it out there. There’s a lot of sh!t that I did not put out.”

Jeremiah also goes into how Carmela has claimed he is no good with finances and that he is blowing his money on lottery tickets. Jeremiah explains that he is the one with the money and he shares a couple stories of how Carmela is the one who is careless with money — including her most recent car trip from Washington state to Florida with her kid, which cost $1,100 dollars (according to Jeremiah).

According to Jeremiah, Carmela arrived back in Florida eight days ago, and during the time that she was back she left twice. That was before Jeremiah kicked her out.

There is some more discussion about Carmela’s $11,000 engagement ring, the couple’s other property currently listed for sale at $25,000, and their 35-foot camper. You’ll have to watch the video for all of that.

Amazingly, Carmela has not posted anything on social media in response to Jeremiah’s video. I’m guessing it is only a matter of time before we get her side of the story, so stay tuned.

I’m hurt no lies but I will never put myself through what I’ve been through these few years..
It was a living nightmare.
I lost everything my home my belongings, my self esteem, I wanted a family I wanted to grow old with someone..
I did the best I could and my self esteem got so low as it was beat out of me.. I will no longer speak in the past but move forward because remembering is so painful and why relive it.
I’ve even had to lie to cover stuff up and smiled through the pain and when people ask me how I am, I hope god forgives me..
I’ve watched everything that I worked hard for be burned, broken, ripped, sold..
Even my body???

I feel so beyond tired but will try my best to get back my strength.. Thank you for praying for me and my family.
I will no longer talk about this situation because there is no point..

I treated those kids how I’d want mine treated.. took them on walks, made them meals, did their hair, made sure they got showers all the while daddy is on his phone doing His thing. I did ask him to put his phone down because I just assumed most people would want to spend every minute with their kids since they barely see them. The 600 dollars he spent at Walmart he failed to mention he bought himself a generator and we got clothes for the kids and food for the house so I can make actual meals instead of kids fending for themselves.

I don’t like traveling long distance trips with kids in the car with jer because if I make wrong turns he yells at me and calls me names .. last time he yelled go die you c*nt b!tch.. and when I don’t listen to how he wants me to drive out of nowhere he puts it in neutral.. so scary! I just don’t want to deal with that I don’t want the kids to hear that either.

I was so happy to have the kids come there I can’t get over him saying that I didn’t want the kids there I just wanted to fix the house that is all I wanted the kids to come and be proud.

The tv was mine that That I bought I had two tvs the other he kicked and broke like everything else I owned, I did take the tv because I spent it all with him to fix our home. And I have no money to get back to my home state. I did put a lock on my phone because jeremiah erased all my kids pictures and our convo history between us. He’s done it many times and erased my boys fathers pictures who is dead now. I had nothing to hide.. I was completely faithful and I truly loved and love him not sure why because I know he didn’t love me.. he wanted me to buy the property and belittle and break me down so I either not make it or do whatever he wants so I get peace.

I’m so upset with him saying I disrespected his kids.. I could say way more but I’m not as I’m f**king tired of the games and manipulation and lies..

Carmela’s son Malachi commented on the Nicki Minaj video by writing “So what jeremiah raber is saying is that his kids not getting a phone call is mental abuse but me waking up to jeremiah raber yelling and strangling my mom isnt, than i dont know what that is.”

Kenya Moore gets restraining order against Matt Jordan, has ‘reasonable fear’ for her life