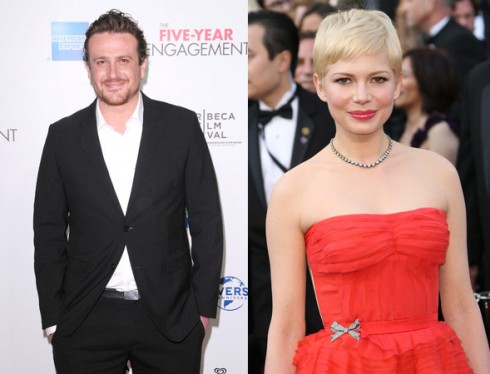 Michelle Williams accompanied Jason Segel to the premiere of his film The Five-Year Engagement and according to sources with People the secretive new Hollywood couple got cuddly at the afterparty.

They were practically inseparable at the afterparty in the Museum of Modern Art. Segel held Williams’s hand and took her around to tables, whispering in her ear. They looked very new and very happy. At one point, he pulled her behind a curtain and she came back out and pointed at him jokingly.

Last night’s premiere was during the famed Tribeca Film Festival and Segel joked a little bit about he imagined himself going through an engagement:

“My plan is to get her to marry me as quickly as possible before she finds out who I really am. I’ll do it romantic, but I’ll do it like over a three-day weekend. We’ll meet on Friday, have our first date on Saturday, engaged on Sunday and married on Monday.”

Segel and Williams have kept this budding new relationship tight-lipped but Jason did comment on it just a little bit when he told Extra when asked about Williams that, “I think I would just very much like to be happy. That’s all I’m going to say about it.”

His costar in Engagement, Emily Blunt, was sitting next to him at the time and added, “He’s a man-boy! He was a boy-boy and now he’s a man-boy.” Jason quipped back, “I might even be becoming a man-man… potentially!”

Jason and Michelle were spotted out a month ago strolling around New York City together. In addition, Segel was seen spending time with Williams’ daughter Matilda. The biggest clue on their new romance, however, was a pic taken of Segel leaving an appearance for Leno with Williams’ photo taped to his iPhone that included the note, “I heart you.”

Personally, I’m a fan of both so I’m rooting for ’em!