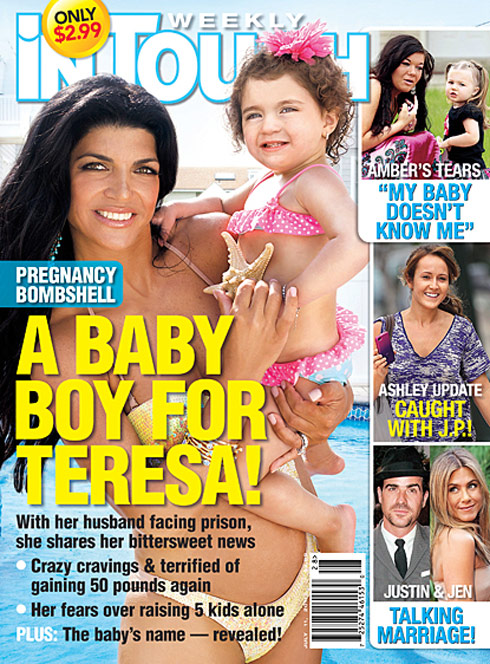 Judging from the cover story on this week’s In Touch Weekly it appears as though The Real Housewives of New Jersey is about to add yet another new cast member, and once again it’s a relative of Teresa Giudice… her son! The controversial table-flipping drama mama is pregnant again, and for the first time in five tries it’s a boy! Or is she?

The headline reads “PREGNANCY BOMBSHELL: A BABY BOY FOR TERESA” with the subheadline and bullets points:

With her husband facing prison, she shares her bittersweet news

As it turns out the whole thing is just one of In Touch‘s infamous “What if” scenarios in which they talk at length about how Teresa would feel if she were in fact pregnant. Bleh.

Teresa and her family must be feeling mixed emotions about the good news as Joe Giudice, Teresa’s husband and the baby’s father, is currently facing felony fraud charges with a maximum sentence of up to ten years in prison. And this is all in addition to the financial problems the family has faced over the last couple years, including bankruptcy and a rather humiliating announcement that most everything they owned was going to be auctioned off.

Oh, and did I mention Joe is also being sued for an altercation that occurred in the Dominican Republic in which he and some other cast members allegedly brutally attacked two men who spoke up after Teresa sprayed one of their family members with Champagne?!?

If this were a 15-second commercial spot it would end with the slogan: “It’s a boy! By Bravo.”

For integrity’s sake I should point out that it is In Touch Weekly and that there has been no official confirmation (or denial) from Teresa, besides noting on her Facebook Wednesday that “tabloids are funny.”