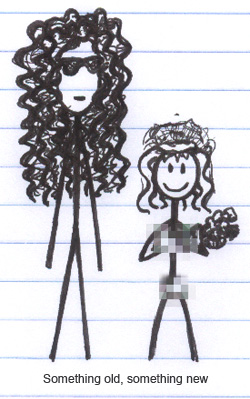 Stern divorced his first wife and mother of his three children in 2001, after 21 years of marriage, vowing to never take a wedding vow again. Apparently his inability to understand what “vow” means hasn’t scared away model and actress Ostrovsky, who proudly became Mrs. Shameless 8 Year-Old in front of a B/C/D list of wedding attendees that included  Joan Rivers, Barbara Walters, Sarah Silverman, Jimmy Kimmel, Adam Carrolla, Robin Quivers and Artie Lang, Steve Schirripa, Chevy Chase, Tommy Mottola, and Donald and Melania Trump. (We apologize for the number of times we mention Donald Trump on this site, but the man is a celebrity news lamprey!) Kelly Ripa’s husband and soap opera star Mark Consuelos got ordained as a minister to perform the ceremony, which brought the perfect amount of gravity to the proceedings. Fellow former influential person Billy Joel provided music for the occasion, and our paper-azzi on the scene transcribed the following lyrics from his performance:

She says, “Howard can you check out my mammaries
I’m not really sure how they look
Are they hot are they nice
Are they both the same size
Would you put them in your next book”

Our congrats go out to the happy couple, and starcasm.net will officially rescind the celebrity amber alert we issued a few months ago for Howard.

******WARNING****** The following is an in-depth scientific article with a very low humor/word ratio. Though it does have a cool graph at the end, it may be a bit much to swallow for those casual starcasm.net gossip readers.

Hidden cameras followed as Garth stumbled onto a group of other chimps. He seemed a bit startled to see other male monkeys for the first time. He observed from a distance for a while, having to relocate eventually when the smell of his unvanquished fecal matter became overwhelming. Garth noticed that the largest male chimp had a harem of chimpettes much like his own, and he would make certain gestures and sounds and the other chimps would bring him a banana, pick fleas off his back, or fan him with a tree branch accordingly. Recognizing the kind of environment and life he was used to, Garth exited his hiding place and approached the group. The response was little more than a collective sideways glance until Garth began to mimic the gestures and sounds of the largest chimp in an attempt to get some food. Within the seconds the large, wild chimp was on his feet racing towards the newcomer. He ripped Garth’s arms off and beat him to death with them.

Dr. Cumming argues that throughout the history of life on this planet, any amount of smugness or cockiness that didn’t accompany the physical attributes necessary to defend oneself would usually lead to extinction. He claims that this phenomenon is not only observable in chimpanzees but also in American high schools. He suggests that this inability of people’s assess to cash the checks that their mouths are writing is similar to the sub-prime mortgage lending practices in the finance industry, which has resulted in the economic collapse over the last few months. He warns that we may be on the verge of a similarly large scale social collapse, for which there will be no government bailout. 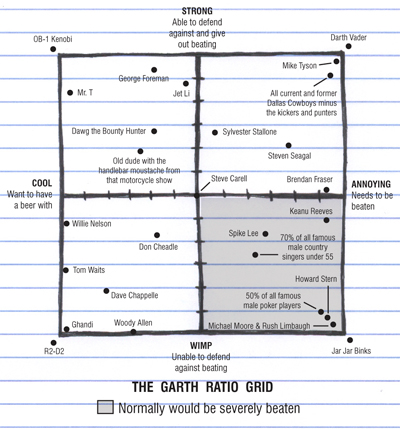