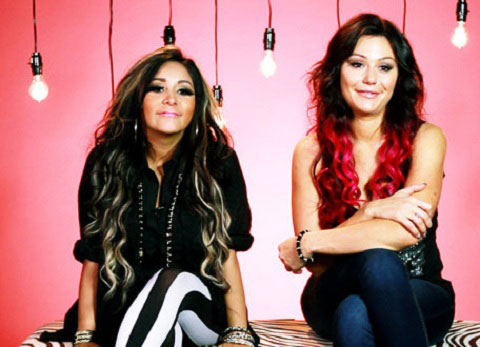 Snooki and JWoww may not have hit it off right away when they first met on Jersey Shore. However, after Snooki’s wild first night, the two became quick best friends. After five seasons with the show, it was announced that the two would be getting their very own spin-off!

The show was first described as a modern-day Laverne & Shirley that would chronicle their journey as best friends moving out on their own and conquering a new town, but once Snooki announced that she was pregnant and engaged, it took a different turn! JWoww expected to be partying with her best friend for a few months — not living with a pregnant lady!

JWoww and her boyfriend, Roger Matthews, have been dating since they met several seasons ago on Jersey Shore, and we have to wonder, did living with a pregnant and engaged Snooki make JWoww want the same for her life with Roger? It may have! She definitely has babies on the brain.

JWoww recently talked to Life & Style about Snooki and having children of her own. “Snooki thinks I’ll have my first when she has her second.” She added, “We are about 2½ years apart, so I thought, our kids can be two years apart.” Is she saying that her and Roger are going to have a baby in two years? It would be amazing if these two were pregnant at the same time — maybe during season 2?

In true BFF-fashion, JWoww is aiming to one day be related to Snooki! Of their future children she says, “They’ll date and have babies. I don’t even care if they date; I just want them to have kids so we’ll officially be relatives!” Mating their children? That’s a whole different kind of crazy then we are used to seeing from Jersey Shore cast members, but we love how close these two are!

Snooki and JWoww’s spin-off experience may not have been what they planned, but producers claim that it will still be well received and fun to watch. We’ll be judge of that when Snooki and JWoww premieres one week from today, June 21! One thing is for sure — this reality couple is sure to make it last.. one grandbaby at a time!