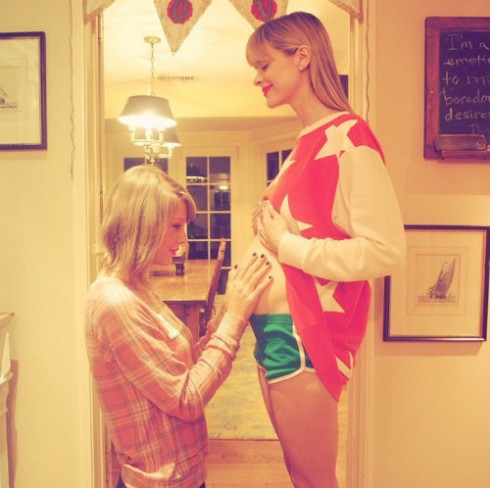 Considering how Taylor regularly acts like a fairy godmother with her fans, it’s seems like it was only a matter of time before she became a godmother in real life. Jaime King and Kyle Newman made that happen this weekend when they asked Taylor to serve as godmother to their new baby.

“Guess who just got named Godmother of this little one…” Taylor said of the top picture on Instagram. “(ME)”

Jaime seemed equally excited to have Taylor as godmother to her new baby. She posted on Instagram, “And @taylorswift will forever be looking over our new baby @kyle_newman -we all love you!!!! Xx”

Jaime and Kyle announced their new addition just two weeks ago with the help of their oldest child, James, who was pictured holding a sign that said, “I’m gonna be a big brother! Who da boss now? I’m so excited!” Jaime added in the caption, “So excited to announce THE SEQUEL Coming later this year!! … #BabyTown2 – Created by @kyle_newman and @jaime_king. Also starring #JamesKnight”