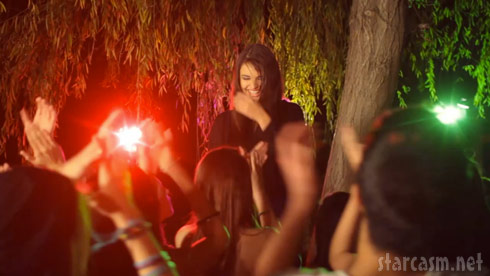 Things happen fast in the information age! Just one week ago no one had ever heard of Rebecca Black and virtually no one had seen her Ark Music Factory video for the song “Friday.” But, thanks in large part to a mention on Tosh.0, Rebecca’s Dionysian dissection of teen angst and euphoria has garnered well over 5 million page views and is on its way to becoming the biggest pop song by a teenager since “Oops, I Did It Again!”

And don’t think for a second that the executives in charge at Ark Music Factory are unaware of Rebecca’s potential! In the spirit of Tiffany and Debbie Gibson they have announced Rebecca Black will be going on tour – playing to packed houses of screaming, adoring teenage fans at malls across America! 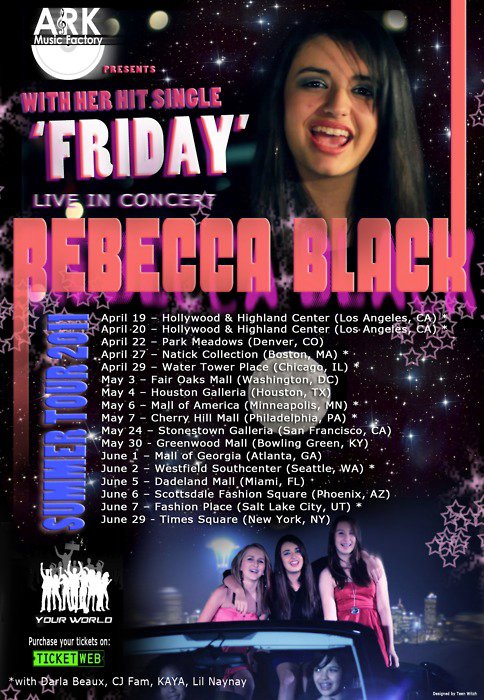 News of the tour has already sparked the formation of dedicated fans who plan to follow Rebecca from town to town, creating a counterculture based on their mutual love for Friday and fun. The media has already started to refer to them as Blackheads.

And just in case you can’t read the poster above, here are the dates all typed up!

I’m excited for Rebecca – it must be a wonderful thing to realize you are the next Britney Spears! But, I really think she needs to get a new tour manager. I don’t think any musician has ever played consecutive dates in Atlanta, Seattle, Miami and Phoenix! And what’s with all the open Fridays? She plays one Friday in May and none in June?!? (By the way, that Friday date at the Mall of America in Minneapolis on May 6 is preceded by a Thursday. That is followed by a show in Philadelphia on Saturday and Sunday comes afterwards.)

According to the poster you can get your tickets at TicketWeb.com, although nothing is turning up yet when you search for Rebecca Black.

Jersey Shore Spoilers: Vinny slept with both Snooki and Angelina in Miami!