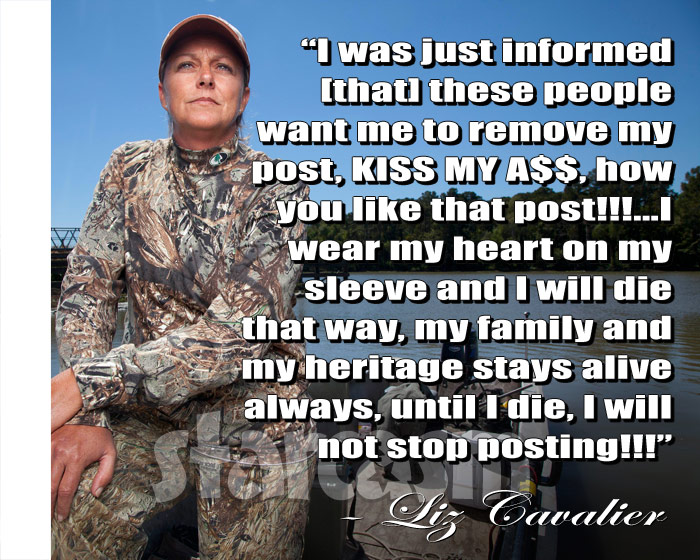 History Channel’s life-or-death alligator hunting reality series Swamp People is one of those rare reality show success stories that doesn’t depend on drama, whether it was on screen or off. But, after History Channel overhauled the cast for the upcoming seventh season, some of those who were told they are not returning are expressing their anger and frustration online, apparently against the network’s demands!

Among the official cast members reportedly not returning for the new season are the following:

“Due to unknown reasons by the production company ‘Original Media’ my family and myself, along with other original cast members, besides Jeromy and David, will no longer be participating in the Swamp People series, starting with season 7,” wrote Swamp People‘s leading lady, Elizabeth Cavalier, on Facebook. “It saddens me to know that our fans are the ones who will suffer from these unexplained actions by the new management of this production company. REALITY. We will continue with our regular lives and hope to stay connected with all of you in the future. To all of my fans, with love, GatorqueenLiz.”

Jeromy Pruitt and David LaDart also broke the news to their fans on Facebook:

Just wanted to let everyone one know that we just got the call from Swamp People on History that we were cut from the show. We had a great time an met so many wonderful people. Thank you to all the fans. You haven’t seen the last of Jeromy Pruitt and David LaDart aka the SWAMP LEGENDS 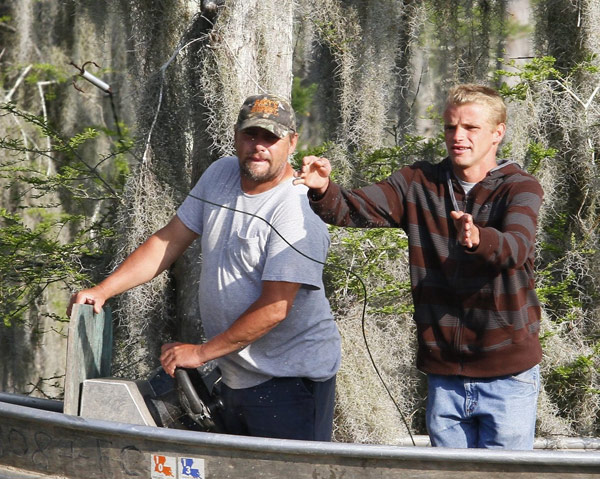 Junior and Willie Edwards (photo above) took to Facebook to quell rumors that they were fired because they were demanding more money:

I see a bunch of posts saying that a certain family was saying that we asked for more money and that’s why we are not on the show anymore. To clear up gossip and BS. We never asked for anything. Only communication we had with the production company was when we were told that we would not be on the show any more.

We have made our living off the bayou all our lives. We don’t need a camera stuck in our faces to do that like some people.

Meanwhile, returning cast member Jacob Landry shared a post in which he revealed that the Landry family would be back, and that he had no say in which cast members returned and which did not:

Not sure about all the comments going around about certain cast members being cut from the show but as for as the Landry family, we will be filming in just a few short weeks for season 7! We were told there would be some changes but they could not say who or what. Unfortunately we do not have a say so in who is on the show but we will voice our opinions to the higher ups Thanks to everyone who is a fan of the show and please be patient to see how it all pans out.

The frustrated comments riled the feathers of not only the fans of the show, but apparently the show producers as well. According to Liz, they demanded the posts about the firings be taken down! As you might imagine, Gator Queen Liz was not about to back down!

Hello everyone, I was just informed from these people want me to remove my post, KISS MY A$$, how you like that post!!! I was told they had a lot of nasty phone call and complaints, well these people call this business, well I’m different, I wear my heart on my sleeve and I will die that way, my family and my heritage stays alive always, until I die, I will not stop posting !!!And I support Louisiana 100 percent, rather keep my pride than sell my soul to the devil!

Choot ’em Lizbet!! In the comments section Liz added, “Bunch of CANDY ASSES” before making it clear that she was thankful for the opportunity. “You know I am so proud to have shown what my momma and daddy showed me, it was a good run but its done, life for us will still go on, my memories are good memories.”

Liz’s husband Justin Choate also chimed in on the matter:

Liz and I would like to hear what the fans opinion is on this. We were advised by a certain two companies that I will not name, to delete our posts from our pages and not to comment on any of this anymore. Please let me hear your thoughts on this. We always put our friends, family, and even strangers first. I believe we have the right to tell everyone the truth. What do you think. 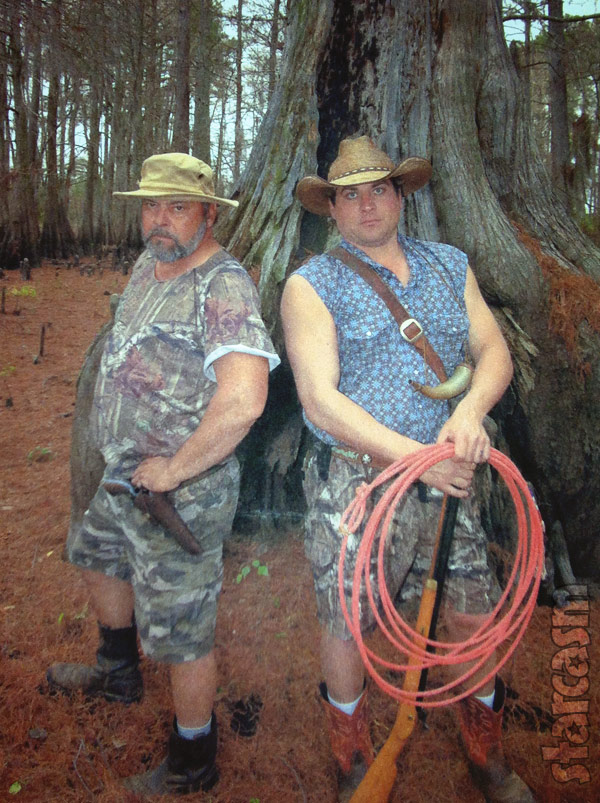 Jeromy and David (photo above) shared a similar message/request:

Let us know what y’all think about Liz an Justin being told to remove their post off of facebook. well david and I are with Justin and Liz. What do y’all think?

Upset fans of Jeromy and David even started an online petition at Change.org asking for the return of the duo to Swamp People. At the time of this post it already has more than 5,300 signatures.

As you might have guessed, a portion of the anger from fans has been misdirected at some of the returning cast members, which is something Jeromy and David wanted to make clear they did not want:

Jacob Landry (Swamp People) sorry for all the negative comments being made by fans about our (Gator Queen Liz,Justin Choate,Junior and Willie Edwards ) departure from the show. We have never encouraged any negativity towards your family because we consider y’all our family. We just simply let all our fans know that David and I would no longer be on swamp people. Also, David and I have never made any demands to the network or anyone else for that matter. We want to wish yall luck and continued success with the show. Wish David and I could continue to be apart of the swamp people family! It’s funny how all of us cast members have always said there’s nothing more important than family and a true family sticks together through thick and thin. So, some cast members( and I won’t say who) should practice what we preach and preach what we practice to keep family together!

Oh snap! I think History Channel is missing out on an opportunity to launch a Swamp People spin-off series comprised of those cast members who were not asked to return, and that cast could be in competition with those that did return! If that happened, which team would you be on?

Getting back to the firings… Cast turnover is nothing new in the reality show business, but is certainly sounds like Original Media just did not handle this well. They should have been respectful enough to have a sit down, or at least a lengthy phone conversation, with those not returning to explain their decision. Am I wrong?