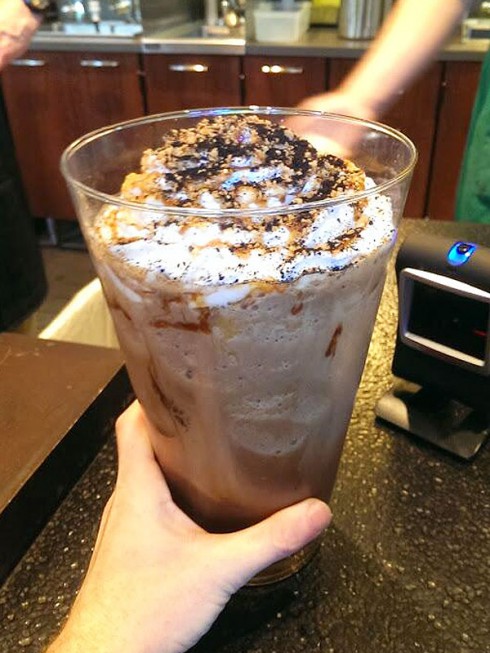 True to the “Everything’s Bigger in Texas” saying, a Dallas man officially ordered the largest, most expensive Starbucks drink in the coffee chain’s history.

Andrew Chifari took his own one-gallon container to the shop and challenged the baristas to fill it with a palatable combination of syrups and espresso. Dubbed the Sexagintuple Vanilla Bean Mocha Frappuccino, the resulting 128-oz. drink included 60 shots of espresso, mocha, caramel and hazelnut drizzles, a scoop of protein powder and complimentary whipped cream.

The caffeinated colossus totaled $54.75 — but Andrew got off without paying a cent because of the company’s loyalty program. (Buy 12 drinks, get your 13th Sexagintuple Vanilla Bean Mocha Frappuccino for free!) 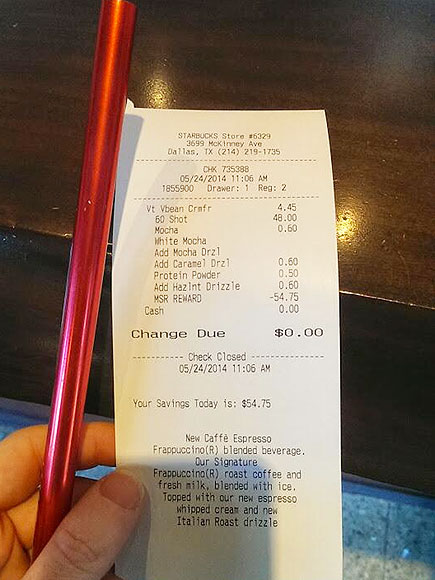 Unlike the previous Most Expensive Starbucks Drink record holder, who crafted a Quadriginoctuple Frap with an odd combination of flavors, Andrew made sure his drink would satisfy.

“The $47.30 guy put in two bananas, strawberry, matcha powder, pumpkin spice, and lots of other things that probably don’t go well together and definitely don’t go well with 40 shots of espresso,” Andrew told Consumerist. “They help raise the price, so I can’t fault him for the strategy, but I didn’t want to go that route.”

With simpler flavors, Andrew said his drink was delicious. The trick was pacing consumption over the next five days…

Aaaaaand done. Took 5 days, but I drank it all. #MostExpensiveStarbucks pic.twitter.com/auscv0MtNV

‘Sriracha: The Documentary’ is officially happening, thanks to successful Kickstarter campaign

Twinkies set for “the sweetest comeback in the history of ever”