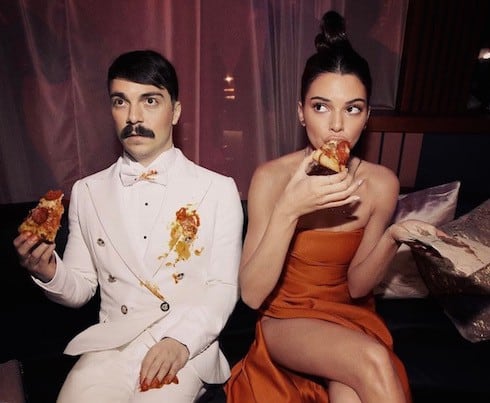 Kirby Jenner has become just enough of a social media phenomenon to pick up a sizeable following and a fair bit of acclaim, but not big enough to blow up his (her?) carefully crafted joke. Which joke is that Kirby Jenner is actually the fraternal twin of Kendall Jenner, who is currently best-known for parlaying reality TV stardom into a legit career as an increasingly wealthy supermodel and also as the star of the most infamously tone-deaf advertisement since Joan Halloway went to the mattresses for the Jaguar account.

Ever since I got my pet bird, Shannon, we’ve wanted to put together a freakin dope magic show for the squad. But doing magic in front of people is hella scary… so Kim got me and Kanye a Groupon for a magic class and now me and Shannon have been called “the best dinner theater at Dave & Busters” so far!!!!!!! #ThanksKim #ImaChillHarryPotterNow #AlsoAfraidOfBirds #SmokeInhalation

Kirby’s shtick is that he’s always palling around with sister Kendall, but is also always just out of frame in whatever photo she’s just shared with her 79 million followers. So his take on the same image is accompanied by a goofy anecdote providing the necessary context for whatever gleefully silly thing he’s doing to undercut the standard supermodel-y thing Kendall happens to be in the middle of at the time. Like, for example, being a supermodel:

Ever since I learned the word camuflage in my 4th grade spelling bee it's been my GO TO prank! It's kind of hard cause I'm SUPER colorblind but I make it work 😉 #camulfage #TradeSecrets #MakeItWork #inspire #knowledge

The joke is that much more satisfying when Kylie Jenner, who is great at being photographed but who is to supermodels what Craig Kilborn is to The Daily Show, gets involved:

Kylie lost her car keys in the sand so the squad teamed up and searched for like 4 hours haha. Turns out they were actually in the car and the car was running in the parking lot the whole time but it was still def really dope to hang out with the people I love most. Also special shout out to St Bart's Hospital for treating me for sunscreen poisoning! Love u guys! #SentimentalKirby #Teamwork #KylieLosesEverythingLOL #SunscreenPoisoning #squad

For my money, Kirby actually reached Peak Jenner last Halloween, although that’s partly because years spent mocking Tyga have made me a sucker for even a halfway clever joke at his expense:

I guess I screwed up and thought Halloween was on the 30th this year LOL smh At least my carrot costume was super comfy!! Special S/O to Tyga for graduating his improv class! He was so funny and the show was great!!! #iGetToCelebrateHalloweenTwiceNow #IWasACarrot #4yearsinarow

Given all that, the fact that the question “Is Kirby Jenner actually Kendall’s twin?” gets asked as often as it does has become another element of the joke. An Us Weekly profile from last fall mentioned at the outset that the parody account is “run by a small creative group in LA,” and a Daily Mail feature from the very end of last year played up the “fraternal twin” angle while also pointing out that Kirby is photoshopped into every image. And this Vice “interview” with Kirby–who never breaks character in any interview, and God bless the lovable doofus for it–approaches Andy Kaufman-on-Letterman-level dedication.