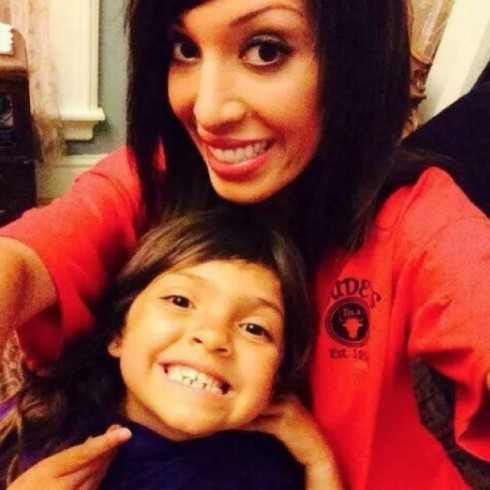 Teen Mom‘s Farrah Abraham recently added another project to her plate — and it’s the most concerning yet, which is saying something considering the girl is also working as a stripper/researcher.

“We just have a schedule, we work it out, and we are with each other a lot because I work from home when I’m here and she’s homeschooling,” Farrah said in the interview last week, which was transcribed by Reality Tea.

Hearing that, there was some room for hope that Farrah hired an actual educator to work with Sophia. But, alas, it sounds like Farrah is the one doing the teaching… At least based on a tweet she recently posted. (Yes, she also added one of our pictures of her. No, we have no idea why.)

The decision to homeschool Sophia seems to be a recent one: When we spoke with Farrah in June, she indicated Sophia was going to an actual Kindergarten this fall.

She goes to school full-time and is starting kindergarten this fall, which I’m super excited about because I remember my first day of kindergarten. I can’t wait for hers… I don’t really think that’s she’s so excited about that because she’s like, ‘I don’t want to switch schools!’ She’s made a lot of friends, which is something I love about Austin was Sophia made so many friends and there are a lot of genuine, good people to influence her life and her teachers are very good.

In addition to homeschooling, Farrah recently participated in the Couples Therapy All-Star Reunion. Although she was able to patch things up with former Teen Mom co-stars Catelynn Lowell and Tyler Baltierra, a new clip reveals she started a brand new feud with Joel “JoJo” and Tashaunda “Tiny” Hailey.

The first part of The Couples Therapy Reunion airs on VH1 tonight at 9/8c.