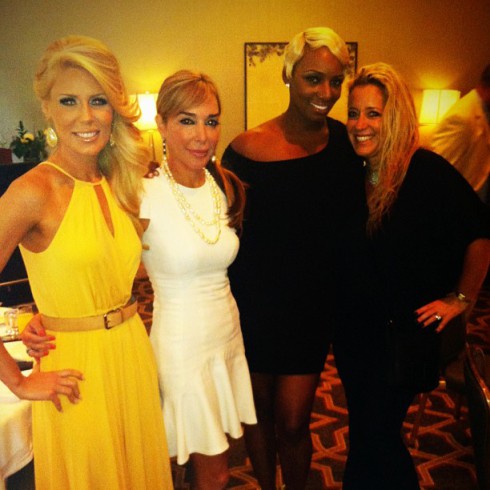 NeNe Leakes is officially Mrs. Leakes once again! She and her former (and now current) husband Gregg Leakes tied the knot on June 22 with Bravo cameras in tow, filming for her wedding special, I Dream Of NeNe: The Wedding. While fans will have to wait until the fall to see the lavish affair for themselves, a guest of the event is talking to us about what went down.

“Porsha, Kim, Kandi, Phaedra and Cynthia were in attendance,” a source tell Starcasm exclusively. “Kim looked big.” (Despite photos of her looking to be about 5 months along, neither Kim nor her husband Kroy has confirmed that she is in fact pregnant.) 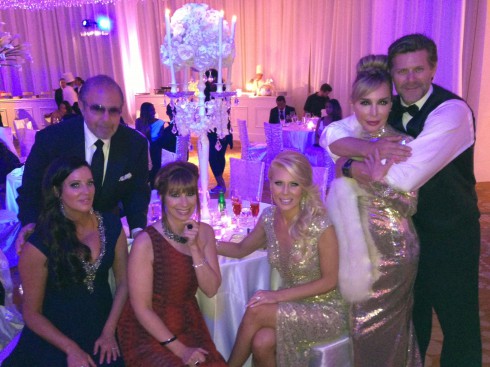 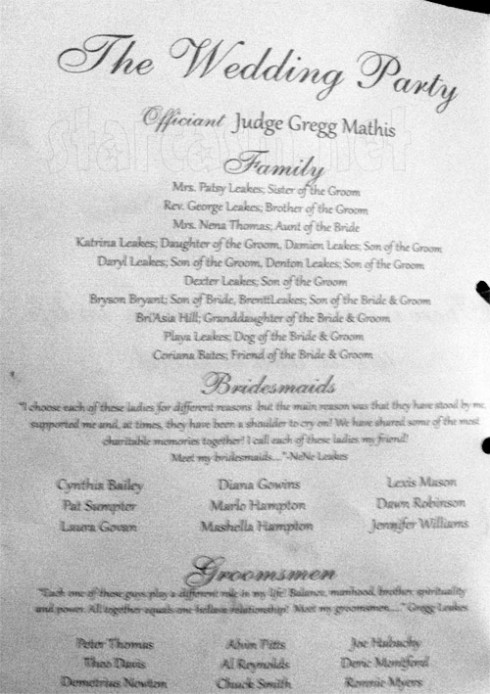 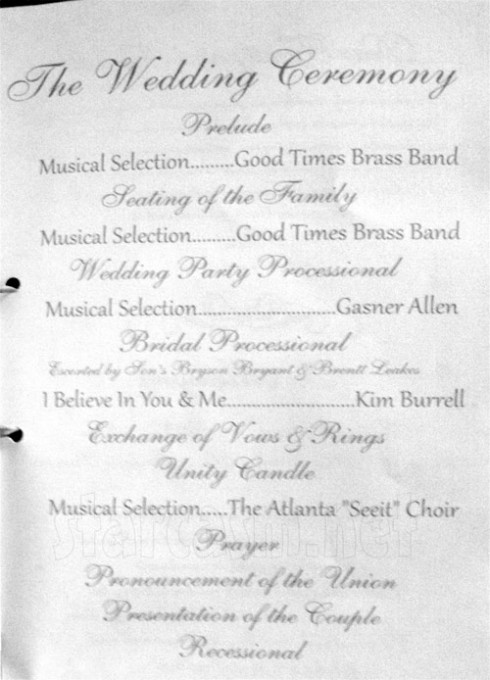 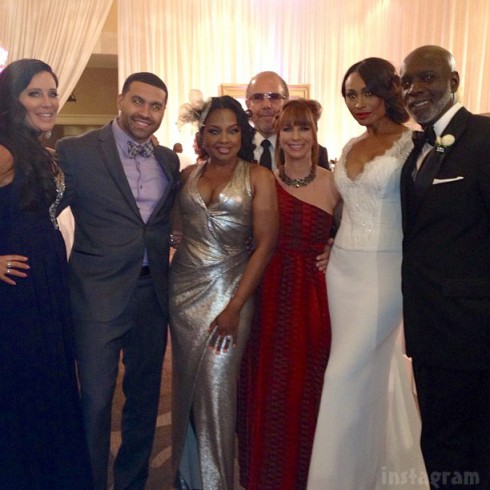 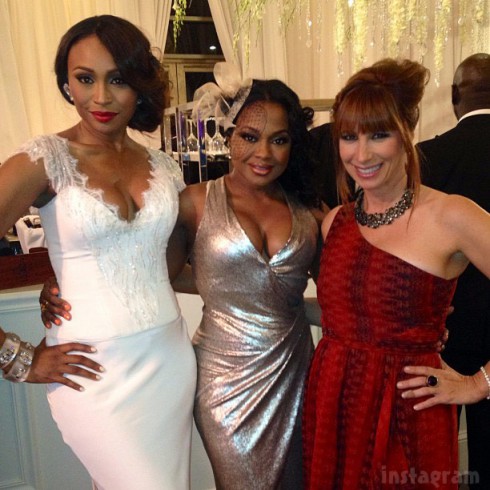 NeNe’s granddaughter Bri’asia was also included in the ceremony. “The granddaughter was carried down the aisle — she’s gorgeous!” our source reveals.

During the reception, guests ate from a towering white cake and watched as American Idol alum Fantasia Barrino performed, a surprise arranged by Gregg according to Straight From the A. The blog reports that Fantasia was the only surprise up Gregg’s sleeve:

Greg cleared the dance floor and he got everyone snapping fingers. His groomsmen each read a card to Nene about Greg’s feelings for her. They each present their statements one by one and then get down on one knee in front of the new bride. 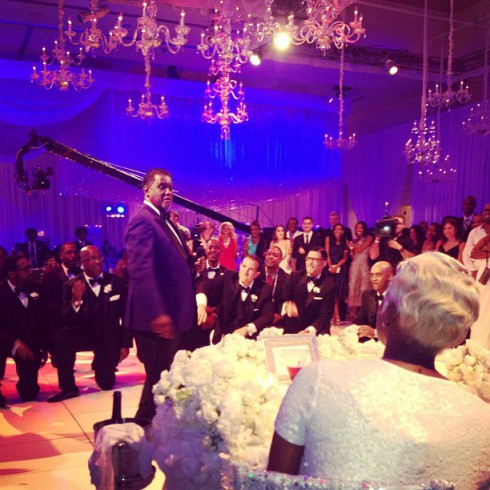 Greg then presented his lady love with a huge sparkling portrait of herself, which is made out of some type of crystal. And then… as if on cue, he says “we started from the bottom now we here’ and the DJ then plays Drake’s hit song of the same name. 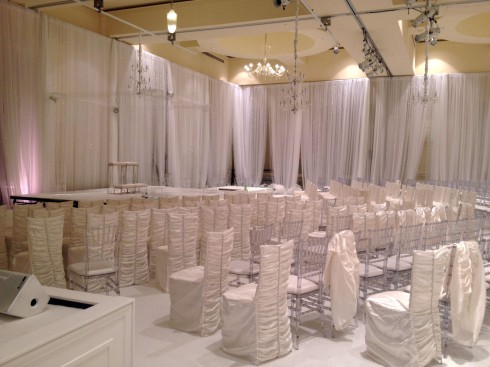 In true Real Housewives form, NeNe didn’t stop at just one amazing dress — she had three. “Everything was decorated in white,” our source says. “NeNe changed dresses three times. All dresses were white.”

Following the ceremony, Patti Stanger tweeted, “Greg made me cry and I had no tissues. Ruined my make up. Sat next to @Kimzolciak n @biermann71 ken n Barbie win best couple,” and also told her fans, “The bride was over the top glam hollywood gorgeous.”

Jill Zarin tweeted that it was a “magical night.” 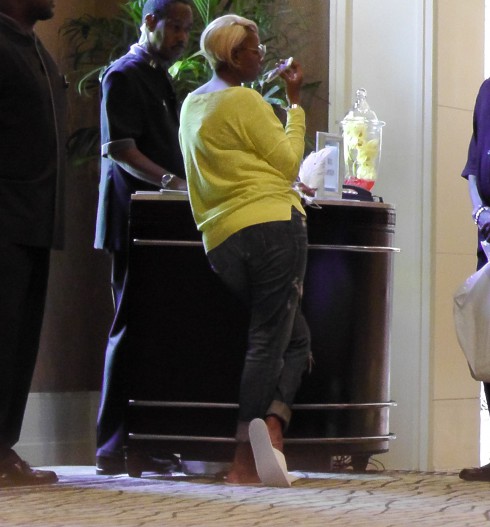 ^ NeNe Leakes spotted making a couple of last minute preparations at the hotel prior to her and Gregg’s wedding ceremony.

Earlier today NeNe and Gregg hosted a brunch for the wedding party and guests, Here is the happy couple posing with Gretchen Rossi and Slade Smiley: 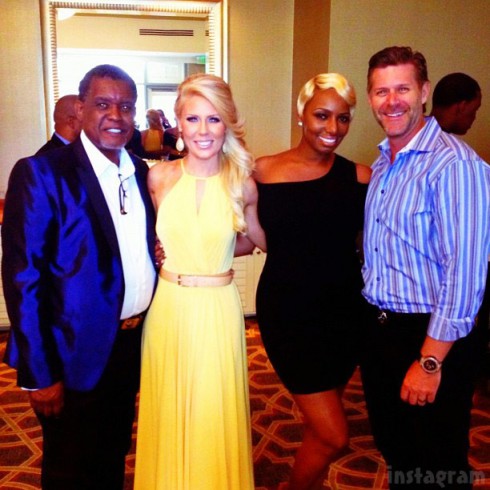 And Gretchen and Slade with Cynthia and Peter: 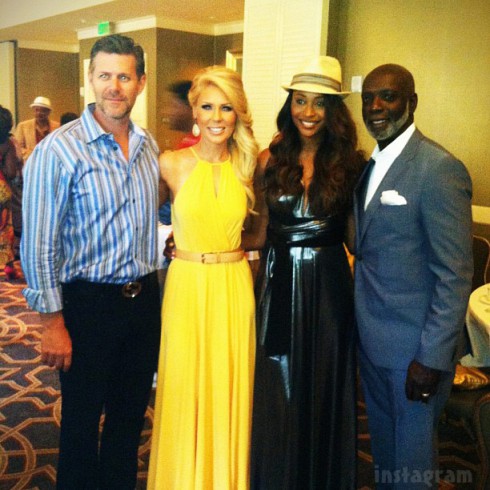 NeNe and Gregg rang in 2013 with a New Year’s Eve proposal following a romantic dinner. Gregg wined and dined NeNe before taking her back to the beach house which he had decked out with rose petals, candles, wine, and a heart made out of Hershey Kisses on their bed. Who could say no to that?

After divorcing in 2011 after 15 years of marriage, NeNe and Gregg reportedly began seeing each other again in early 2012. Neither party confirmed the relationship until November.

Below are photos of Kandi Burruss, Slade Smiley and Gretchen Rossi arriving to the InterContinental prior to NeNe’s ceremony. Click to enlarge. 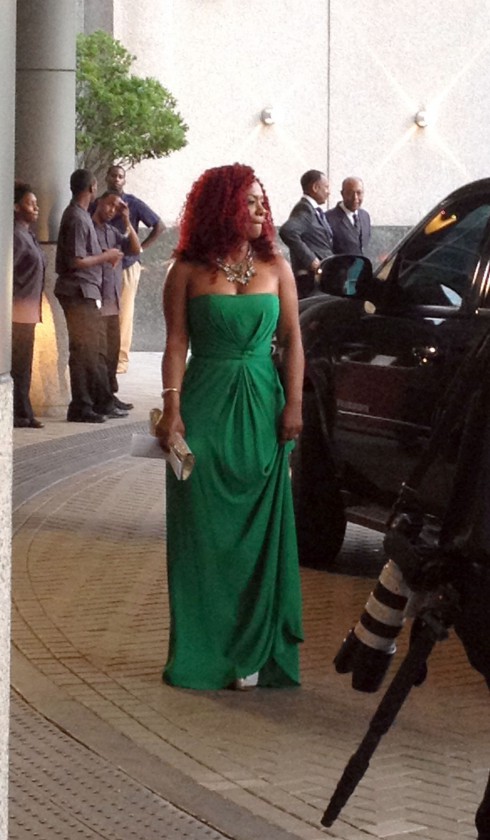 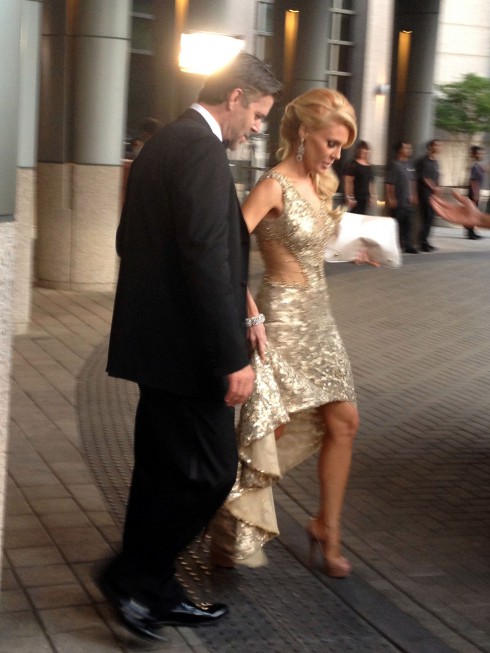