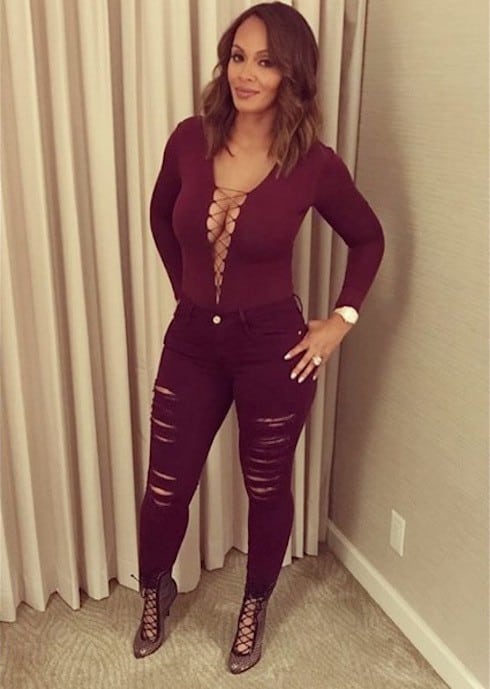 Evelyn Lozada is back! Evelyn herself confirmed her return for Basketball Wives LA Season 6, in an update later seconded by none other than VH1 itself. In fact, Evelyn chose a particularly high-profile venue to announce her return; she was engaged in guest-hosting duties on The Real and had already teased a “big announcement” before dropping the news later in the show.

“I know what everyone’s thinking,” Evelyn said, and she did: “‘Is she going crazy? This is her going backwards.'” Indeed, she appeared to be done with the franchise for good when Basketball Wives was canceled in 2013–and finished with reality TV altogether when Ev and Ocho, the spinoff featuring herself and ex-husband Chad Ochocinco, got the ax thanks to his domestic battery charges. But, as she went on to explain, a good talk with creator and star Shaunie O’Neal helped bring Evelyn back into the fold:

“We just really want to change the direction of the show,” Evelyn added. “I feel like a lot of the arguments and a lot of the story lines are kind of, you know, have been done before.” It might also be worth pointing out that Basketball Wives LA Season 5 had the lowest ratings of the whole franchise to date–but maybe Evelyn’s inclusion will help perk things up for Season 6.

Nor is Evelyn the only cast announcement for the show’s new season. According to recent reports, BBWLA will get a fresh infusion of baby mama drama thanks to new cast members Aja Metoyer (who had a child with Dwyane Wade while he and Gabrielle Union were on a break) and Keonna Green (who helped bring about the acrimonious split between Nick Young and Iggy Azalea).

Plus, according to Shaunie herself, work on BBWLA Season 6 may have already begun:

Back at it again ?

Who are Basketball Wives LA married to? List of husbands for the main cast