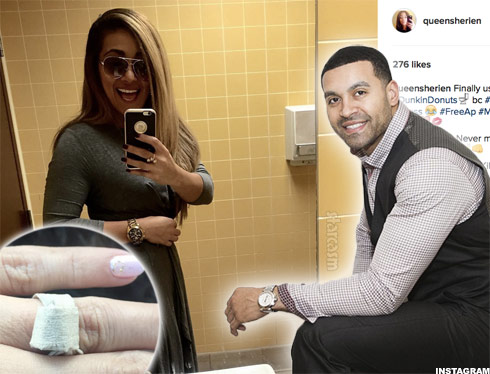 Sherien Almufti has made her engagement to Real Housewives of Atlanta star Apollo Nida Instagram official!

Almufti shared a snap of some fancy fingernails along with a makeshift ring that the imprisoned ex-husband of Phaedra Parks gifted her. “Awe my baby @apollonida03 finally gave me a ring, it’s made out of the finest prison paper towels in chocolate brown. ?????? #CantGetMyHandsWet #LoveHimStill #LOL,” she captioned the image.

Awe my baby @apollonida03 finally gave me a ring, it's made out of the finest prison paper towels in chocolate brown. ?????? #CantGetMyHandsWet #LoveHimStill #LOL

Apollo and Sherien, a New Jersey real estate agent, started dating before he began his prison sentence but got engaged behind bars.

Sherien also gave a shout out to her incarcerated intended on his birthday as she wrote, “I’d like to wish this AMAZING, HANDSOME, FINE, SEXY & MOST LOVING man a happy birthday! @apollonida03 Although you’re not able to enjoy this day to the fullest… Know that God has a bigger and better plan for you. Those who know you, know that you deserve all the best. You have the biggest heart! I can never have asked for a better friend/partner. I love you so much! Keep your head up, I got your back through thick and thin! HAPPY BIRTHDAY.”

In other Apollo Nida news, TMZ confirmed via court docs that he and Phaedra Parks are officially divorced. Apollo got served in prison in March and the judge signed off on the dissolution in July after Nida failed to respond.

UPDATE – Not so fast! A judge has tossed out the divorce decree after deeming it was unfair to Apollo, and Apollo is now reportedly looking for millions from Phaedra, as well as joint custody of their kids?!