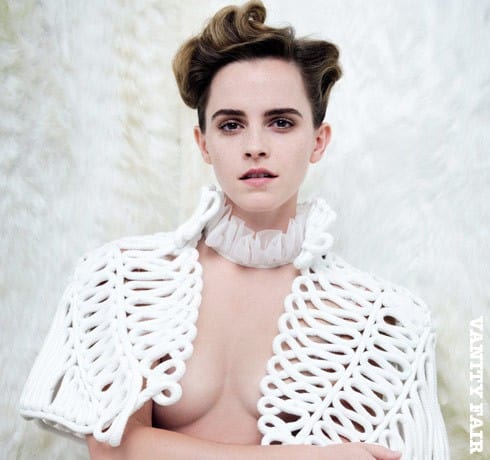 Outspoken actress Emma Watson has fired back at critics who are claiming that she undermined her feminist ideals by posing with her breasts partially exposed for a recent magazine spread.

The 26-year-old UN Goodwill Ambassador was out promoting her latest film, a live-action remake of Disney’s beloved Beauty and the Beast, and was asked by Reuters about the controversy over her appearance in Vanity Fair:

“It just always reveals to me how many misconceptions and what a misunderstanding there is about what feminism is. Feminism is about giving women choice. Feminism is not a stick with which to beat other women with. It’s about freedom, it’s about liberation, it’s about equality. I really don’t know what my t**s have to do with it. It’s very confusing.”

The blowback appears to have started from a tweet sent out by radio host Julia Hartley-Brewer:

Emma Watson: “Feminism, feminism… gender wage gap… why oh why am I not taken seriously… feminism… oh, and here are my tits!” pic.twitter.com/gb7OvxzRH9

Watson went on to detail how the pose in question was just part of a creative shoot “We’d been doing so many crazy things on that shoot but it felt incredibly artistic and I’ve been so creatively involved and engaged with Tim and I’m so thrilled about how interesting and beautiful the photographs were,” she said.