Issue 8 of Duh! Magazine hits virtual stands today! It’s been a little while since the last issue, so this one is a “Special “DUHble Issue” with double the headlines, double the tiny crude drawings and double the funny! Also, this issue comes with a “DUH! Focusses On Boobays” section! All sorts of titillating celebrity mammary stories that you thought would probably happen and they did! 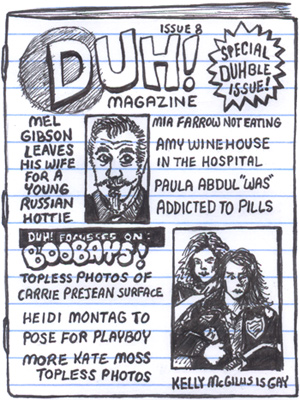 Mel Gibson Leaves His Wife For A Young Russian Hottie
A young Russian hottie singer to be exact. Oksana Grigorieva (39) was spotted out with Mel (53) at the premiere of X-Men Origins: Wolverine a little more than two weeks after Mel’s wife of nearly 30 years Robyn Moore filed for divorce. The marriage has apparently been on the rocks for some time and a rep for Mel tells People magazine, “Mel has been single for almost three years and it’s nice to see him getting out and enjoying himself.” (Oksana is not Jewish and judging from the photos it seems the new Femel Gibson passes the Gibsonian “sugar tits” test)

Mia Farrow Not Eating
Me So Narrow is going to save the unfortunate folks in Darfur by living life as usual and calling it a hunger strike. Her plans are to just drink water for 21 days. (Not that impressive when you consider Lindsay Lohan has been going for three months on nothing but Diet Coke, liquor and Adderall. Perhaps someone should inform Lindsay that she’s showing solidarity for some less fortunate group somewhere)

Amy Winehouse In The Hospital Again
Ho hum. Ho sing. Ho drink a lot. Ho take drugs. Ho go to hospital. Amy is back in St. Lucia and back to being Amy, this time reportedly fainting from dehydration after drinking way too many umbrella drinks. Prison is often referred to as “The Big House” – I think we should start calling hospitals “The Winehouse.”

“How’s Aunt Sally?” “Not too good. If she doesn’t get better soon we’ll have to take her to the Winehouse.” 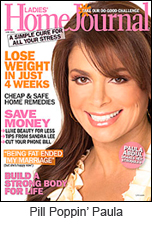 Paula Abdul “Was” Addicted To Pills
P Abby admits in a Ladies’ Home Journal cover story that she was addicted to pain medication she started taking “to combat pain from injuries that happened during her grueling years as a dancer – beginning with a back injury when she was 17 and including a neck injury sustained in a plane crash in 1993.” (Paula Abdul was in a plane crash?!? I remember her plain “Crush” song about that time, but nothing about Abdrool almost becoming the next Patsy Cline!) After being diagnosed with reflex sympathetic dystrophy syndrome (I think that means when other people are dancing she was unable to not dance along) in 2005, Paula started the three course drug plan, mixing a pain patch, nerve medication and the occasional muscle relaxant. She tells LHJ the combo sometimes made her “get weird.” (Or “be Paula Abdul” as it is more commonly known) At Thanksgiving in 2008 she admitted herself to La Costa Resort and Spa to break her addiction to pills and she says it was successful – just in time for the release of her new single “I’m Just (Here for the Music)!”

Here’s a suitably weird summarizing quote from People: “Thanks to her 15th surgery, yoga and spiritual workshops, she says she feels 96 percent better.” (The other four percent will come after three more surgeries and a conversion to Islam)

Kelly McGillis Is Gay
Top Gun super-fox Kelly McGillis has officially come out of her glass closet in an interview with shewired.com. The 51-year-old actress has been fighting rumors of her lesbianity for years, going so far as to play a closeted Army colonel on The L Word. And to officially welcome Kelly to the world of jug love, Duh! Magazine presents:

Topless Photos Of Carrie Prejean Surface
Of course. High horses are a dangerous ride for those in the public spotlight – even if you’re just a pretty pageant contestant trying to hold on for your fifteen minute rodeo ride – and Carrie Prejean is getting shot right off of hers. Previous to becoming Miss California, the Miss USA runner-up and anti-gay marriage advocate participated in a professional photoshoot in which she wasn’t wearing prejeans, a preshirt, prebra, or prepanties and the photos were leaked to TheDirty.com. The site released one photo that features Carrie in just her pink panties, but they say there are other photos from the shoot that reveal every bit of Carrie’s congeniality.

Please don’t tell me our children will learn about Carrie Prejean and Perez Hilton in their American History class. “Hey son. How was school?” “OK, I guess. We learned about Rosa Parks and Perez Hilton and the whole Civil Rights Movement.” Who needs a presidential election to spark public discourse about whether or not the institution of marriage should be reserved for a man and a woman? We have a celebrity gossip blogger and a Miss USA runner-up! Maybe I should find me a local pageant and start asking some tough questions about healthcare, social security and education!

Heidi Montag To Pose For Playboy
Vegas had this one at 1:1 odds. I have to concede that Heidi sports a hot ‘n’ juicy booty, but her soul does not look good naked. So please Playboy, no interview! Actually, to the left is a nearly perfect photo of Heidi. I like to think that if she wore a mouthkini all the time that we would all be spared from the swine flu of her thoughts and words. Now, if we could just muffle her ridiculous fame-mongering actions somehow…Oh, and convince Spencer to become an astronaut so he can be the first man on the sun.

More Kate Moss Topless Photos
The Superficial says it better than I could: “Here’s pictures of Kate Moss topless in Monaco for anyone who was born today and has yet to see her nipples. Congratulations, kid, you’ll see these more often than your own mother’s. That’s math. NOTE: Pics link to NSFW versions, so seriously, don’t get fired over Kate Moss. Save that for at least Jessica Simpson.”

Sean Penn Separates From His Wife Again
Is he gay? Is he getting serious with Hugo Chavez? Or is it possible Lindsay Lohan wasn’t delusional?

Chris Noth To Return As Mr. Big In New Sex And The City Movie
Mr. Big likes money too.

Kirstie Alley Gained 83 Pounds And Loves Butter
I hate to admit it but I would watch the Kirstie-hosted reality competition “America’s Biggest Gainer.”