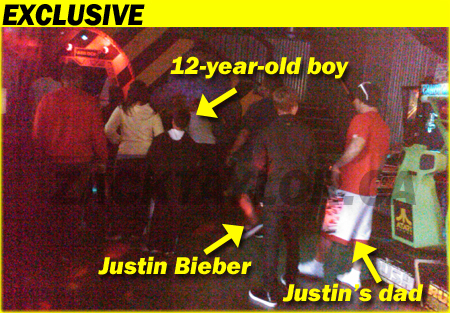 Justin Bieber had an exciting weekend at a Canadian laser tag joint, Planet Lazer. A 12-year-old boy accused the Biebs of slapping him in the face during a game. There have also been talks that this happened after the boy called the teen heartthrob the F-word.

ZackTaylor.ca has been covering the shenanigans and had this statement from Planet Lazer:

The 12-year-old kid was surrounding Justin in the corner with his other little friends and shooting him during the game with their laser guns. Justin did what any other person would do during a laser tag game, and was just trying to get away from getting shot at and accidentally hit the kid while running away. The kid’s sister said he started crying because he was hit hard, but when we saw the boy there was no marks or anything. Justin stuck around after in the lobby explaining what happened, when the kids dad, Mr. Badali, decided to call the police. On a side note: Justin used the nickname, JOE DIRT, while playing laser tag.”

And a statement from the daughter of Planet Lazer’s owner:

“Justin told police he accidentally touched the 12-year-old’s face, and after police interviewed witnesses they let Justin and everyone else go. The next day the cops came to my house to ask a few more questions to my dad, but that was it.”

Seems like there may have been delusions of dollar signs surrounding this incident.

VIDEO Jennifer Aniston was in a PSA produced by her rumored new beau Christopher Gartin!