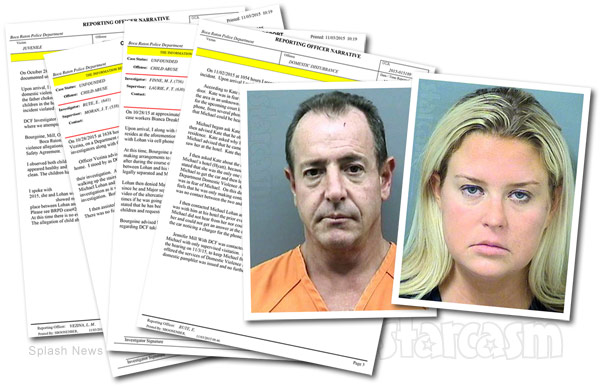 As we previously reported, Michael Lohan and estranged wife Kate Major-Lohan have lost the custody of their two children, 2-year-old Landon and 10-month-old Logan, after police were shown a video of an explosive argument between the two that allegedly took place in front of the children. On Tuesday a judge awarded custody of the children to their grandmother, Michael Lohan’s mother, Marilyn Lohan.

Earlier today the police and DCF reports were published by Splash News detailing both the alleged fight video (and unfounded child abuse claims against Michael Lohan) as well as Michael’s reported appearance at Kate’s apartment on Monday, during which he allegedly banged on the door leading to a call being made to police.

* I will point out that there is a discrepancy in the reports as to the date of the video. The reporting officer states that the video is dated October 11th 2014 (after previously stating 2015 numerous times), while Investigator M.J. Finne states the video is dated 10/10/2015. I am assuming that the 2014 date is a typo. Also, some of the names and addresses have been redacted.

Upon arrival, I spoke with DCF Investigator Leigh Bourgoine, who stated that she received new allegations of domestic violence at ********** Boca Raton. The allegation indicates that on October 11th 2015, the father choked the mother and slapped the 2 1/2 yoa W/MJ on the face. Bourgoine stated that there are two children in the home and that DCF will be removing both of them from the residence as this new domestic violence incident violated the Safety Plan Agreement.

DCF Investigator Bourgoine’s, Case Mgr. Jennifer Mill, and Officer D. Brown responded to the above location where we attempted to make contact with Michael Lohan. Neither he, nor the children were present.

Bourgoine, Mill, Officer Rute, and I responded to **********’s residence located at ********** Boca Raton. We spoke with ********** and informed her that we were on scene in regards to new domestic violence allegations. Bourgoine informed ********** that they were removing the children as a result of violating the Safety Agreement.

I spoke with ********** regarding the allegation about Lohan striking **********. She stated that on October 11th 2015, she and Lohan were involved in argument in which he struck their son ********** and then struck and choked her. ********** showed me cell phone video dated October 11th 2014. The video does reveal an altercation that took place between Lohan and **********; however, the video does not reveal footage of Lohan striking the children. Please see BRPD case #2015-14981 for further information regarding the domestic batter investigation.

At this time there is no evidence to confirm that Mr. Lohan struck his son, **********. The allegation of child abuse is unfounded. DCF database form completed.

On 10/28/2015 at 1638 hours I responded to ********** as a back up for Officer Vezina, on a Department of Children and Families child abuse investigation. Upon arrival I observed DCF investigators along with Officer Vezina in the parking lot.

I then assisted DCF with placing the children in the investigator’s vehicle and escorted them to our city limits. There was no further action taken by this officer at this time.

On 10/28/15 at approximately 19:58 hours I responded to ********** to meet with responding DCF case workers Bianca Dreakford and case manager Leigh Bourgoine in reference to this case.

At this time, Bourgoine advised Lohan that his two children had been taken into DCF custody who would be making arrangements to provide shelter for the two children. Bourgoine then explained to Lohan that this occurred after during the course fo their investigation they observed a video that depicted a verbal/physical altercation between Lohan and his wife Kate Major on 10/10/2015 in the presence of their two children. Lohan and Major are legally separated and Major is not to be present at Lohan’s residence without the supervision of a DCF case worker.

Lohan then denied Major ever being present at this residence on 10/10/15 or at any time without DCF supervision since he and Major separated. Lohan also stated that the video may have been altered to refute the fact that the video of the altercation was time stamped. Lohan then commented that he never struck Major and asked several times if he was going to be arrested for domestic battery. Lohan also asked to the whereabouts of Major and stated that he has been trying to contact her all day. Lohan also asked several times as to the whereabouts of the children and requested that the children’s nanny be allowed to take custody of the children.

Bourgoine advised Lohan that she would meet with him face to face tomorrow as there would be a court hearing regarding DCF taking the children into custody.

According to Kate she advised that her husband Michael Lohan arrived at her apartment and began to bang on the door. Kate was in fear that he was going to kick the door in and harm her. Upon our arrival Michael had already left the area in an unknown direction of travel. Kate further advised that she returned to the apartment to gather clothing for the upcoming court hearing on 11/3/15. While in the apartment speaking with Kate Michael kept calling her phone, from several phone numbers and blocked numbers. We instructed Kate to answer the phone on speaker so that Michael could be heard by officers.

Michael began to ask Kate why she blocked him from calling and why she told him her phone battery died. Michael then advised Kate that he observed a phone charger in her vehicle that was parked a few buildings from her residence. Kate asked why he was looking into her vehicle as she just purchased the phone charger yesterday. Michael advised that he came by to see if she was OK, because he was worried that he has not heard from her since he saw her at the hotel. Kate then yelled at him and stated she cannot argue with him again and hung up.

I then asked Kate about the contact at the hotel and she advised that she met with Michael on 11/01/2015 at Michael’s hotel (Hyatt), because a vehicle in her name was recovered by another police department and towed. Kate stated that she was the only one that could get the car released as it was in her name. Kate then stated she followed Michael to get the car and then left to return to her apartment. Kate was provided a shelter by Boca Raton Police Department Domestic Violence Advocate Ashley Dirstine reference case 2015-014981 on 10/28/2015, because she was in fear of Michael. n this date Kate did appear to be afraid of Michael when he was banging on the door and feels that he was only making contact because of an upcoming hearing that was approaching for child custody. There was no contact between the two and there is no order of protection in place for either party.

I then contacted Michael Lohan and asked him to explain his account of the incident. Michael advised that Kate was with him at his hotel the prior evening, and they discussed the upcoming hearing. Kate then left the hotel and Michael did not hear from her nor could he contact her on the phone. Michael went to Kate’s apartment to check on her and could not get an answer at the door, then advised he located her vehicle in a neighboring lot and looked into the car noticing a charger for the phone. Michael then left the area prior to police arrival.

Jennifer Mill with DCF was contacted and confirmed that the child custody was removed from both Kate and Michael with only supervised visitation. Jennifer was advised to attempt to seek a no contact order from the judge at the hearing on 11/3/15, to keep Michael from contacting Kate while the custody of the children is decided. Kate was offered the services of Domestic Violence Advocate and she refused stating she just wanted to stay at home. A domestic pamphlet was issued and no further action was taken at this time.

Michael Lohan and Kate Major getting married, trying to get pregnant

Lindsay Lohan is pregnant, according to Michael Lohan