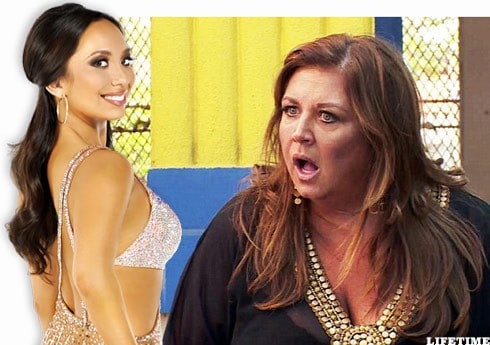 Cheryl Burke is speaking out about her new job as the lead dance instructor on Dance Moms.

Lifetime hired the Dancing with the Stars pro to finish out the filming of the 7th season after Abby Lee Miller abruptly announced, via social media, that she was quitting.

Earlier this month Miller, who many viewers loved to hate as the embattled tough love teacher, was sentenced to a year in prison for bankruptcy fraud.

Following an exhibition performance on Monday night’s DWTS, Burke spoke to reporters about the new gig.

On how her style is different than Miller’s:

It’s going great. The girls are so precious and I feel like they’re traumatized from what has happened with Abby and it’s important for me to still be strict and do what I do and I expect nothing but the best from the girls but it’s also important for me to make them feel confident about themselves because they’re all beautiful, they’re all talented. They all want to move on and do other things and it’s important that they all have the right head on their shoulders and they don’t ever walk in a room with their head down, feeling like they aren’t good enough.

On having grown up with her own demanding dance mom:

I come from the original dance mom. My mom was a crazy dance mom herself and the hardest part is to separate yourself. It was important for me if they want to be there, outside, on the couch talking and gossiping, then that’s fine but they can’t just barge into my room. They have to ask for permission… I think that’s kind of what happened with Abby is they butt heads so much that the focus wasn’t on the girls. It was on the moms.

On whether or not she sought advice from Miller:

I ran into her a couple of times before I even knew I was doing the show but I don’t agree with her teaching methods. I don’t. I mean, I’m strict. I say it how it is as you’ve seen me on Dancing with the Stars but I was just being myself and I think within that that caused a lot of drama between the moms and the girls and with me… You live in this bubble and these girls are not yet ready for the real world and that’s what I’m scared of, that they have been pushed down to the floor so much that they’ll never be independent.

On Miller’s implication that Burke will get special treatment and better pay:

That’s BS. No. There’s no way. I don’t think so. I can’t put the numbers together, obviously, but this was a quick turnaround for them to have me be part of Dance Moms and I think everyone has been treated equally on that show. It really is about getting about the job done. It’s bigger than numbers and budget….you want to do it for the girls. It depends on where your heart is.

Burke stated that Miller’s sentencing will not be part of the show, adding, “I know the moms are probably not sad about it. That’s all I’ll say.”

The remaining part of Season 7 of Dance Moms featuring Cheryl Burke has not been given a premiere date yet, but is expected to air later this year.