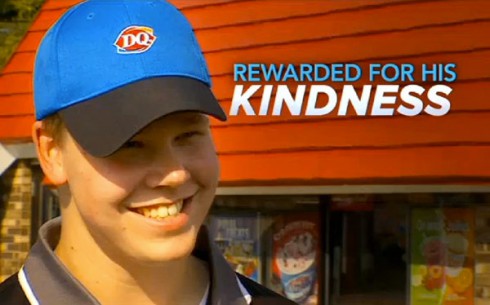 File this one under “Random acts of kindness that give us hope for the world.” Or, if that’s too long, “Awesome people” will do.

Last week, Joey Prusak was an unknown 19-year-old Dairy Queen manager in Hopkins, Minnesota. This week, he’s national news. Here’s why: Joey saw a woman in his store pick up a $20 bill dropped by a blind man. He waited for her to give it back. She didn’t. He asked her to do so, and she refused. In turn, Joey refused to serve her—and gave the blind man $20 of his own money.

“I said, ‘Ma’am, I’m not going to serve someone as disrespectful as you, so you can either return the $20 bill and I’ll serve you, or you can leave,'” he explained.  The woman claimed the money was hers, but Joey didn’t back down, and told her she could see herself out.

One customer, impressed with Joey’s resolve and generosity, sent an e-mail to Dairy Queen relaying the story. That e-mail was then forwarded to the store owner, who posted it on a bulletin board for everyone to see. 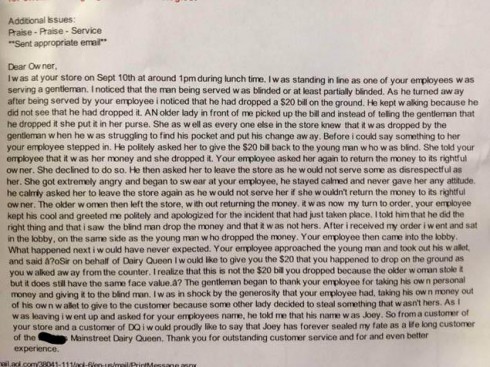 After that, one co-worker shared the story on Facebook, and news of Joey’s actions soon made its way around the Internet, eventually coming to the attention of billionaire Warren Buffet, whose Berkshire Hathaway Inc. owns Dairy Queen.

“He called [Thursday] and thanked me for being a role model for all the other employees and people in general,” Joey told the Associated Press.

While Dairy Queen figures out how to reward Joey, people from surrounding Minnesota towns are thanking him in their own way, dropping in and giving him money out of their own pockets.

“I thought it was pretty amazing, so I drove down here,” a man from Crystal, Minn., (about 15 minutes away), said. “I decided I’d patronize their business and thought he deserved about five times what he paid out.”

Check out the video below to hear more from Joey: