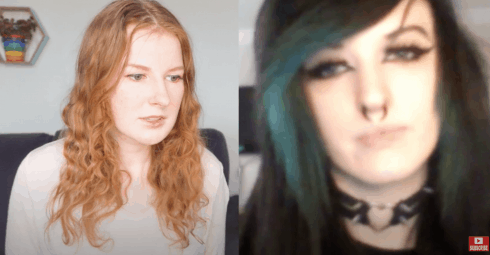 YouTuber Pastel Belle has been diving deep into the allegations against Dahvie Vanity. This morning she published an interview with a girl named Ellie, who first started talking to Dahvie via video chat when she was around 10-years-old. She has her first sexual assault experience with Dahvie when she was only 12. Ellie is not the only minor victim coming forward about the emo singer. Damien Leonheardt, a.k.a. Jessi Slaughter has detailed her sexually abusive experiences with Dahvie Vanity with Pastel Belle as well as Chris Hansen. Over 20 women have complaints against Dahvie Vanity, including at least 3 people who were assaulted when they were minors.

Ellie’s mom was into goth and emo culture, so she added Dahvie Vanity on MySpace in 2009 and started talking to him. At that time Ellie was around 10 years old, and she would watch her mom talk to the singer and trendsetter fairly online about once or twice a month.

Ellie has just turned 12-years-old the first met Dahvie when her mom took her to a concert in 2011. Dahvie often meets with fans before and after his shows. Before the show mostly Ellie’s mom spoke to Dahvie, but after the concert she decided she should start connecting to the singer because she might not have the opportunity to do so again. Dahvie was receptive to the young girl’s conversation and invited her and her mom to his hotel room to party. Dahvie and Ellie’s mom were drinking alcohol in front of Ellie. Occasionally other people would come in and out of the room, but the the three of them were mostly alone in the room together.

Eventually her mom left for 45 minutes to buy drugs and left her young daughter alone with Dahvie. Ellie told the singer she wished she could make music similar to his, and encouraged her to follow her dreams. She also revealed that she and her mom were struggling with money because of her mom’s drug problem, so Dahvie told her she could get some merch for free.

That escalated into him asking the young girl to “perfom or@l s3x on him for a jacket. It just said ‘Blood on the Dance Floor,’ it was black.” Ellie had just turned 12 years old at this time and says she thought that it was a good deal to get a $60 jacket for “free.”

Ellie told Dahvie that she thought her mom would be made at her if she did that. Dahvie’s reply was “You’re not gonna tell your mom.” He further reasoned that if Ellie told her mom, she would not be allowed to come to another show. This manipulation tactic worked on the vulnerable preteen girl. She went through with the act, and then waited for her mom to come back.

When Ellie’s mom returned, she watched her mom and Dahvie get progressively more drunk in front of her. They spent the night in Dahvie’s room. The next morning Dahvie told them he wanted to see them again.

After the incident, Ellie says she didn’t tell anyone what happened because she didn’t think anyone would believe her. Her mom let her add Dahvie on MySpace and actually gave her daughter Dahvie’s private cell phone number. They talked sporadically via text for about a year.

Ellie says she thinks Dahvie knew what he was doing with young girls was wrong, but felt justified because they “wanted to do it.” Ellie points out, however, that “minors can’t consent, bro.”

Ellie saw Davhie again a year later in 2012 at Warped Tour in Cincinnati. She was left alone by her mom and her boyfriend. Dahvie instructed Ellie via text to meet him at the merch table. When she found him he immediately asked her to come back to the tour bus while the rest of the band was still at the merch table selling stuff, signning autographs and talking.

Ellie says she desperately wanted to get out of the tour bus once she was inside. The vibe was much different for her than it was the first time. Although what she describes as happening the first time was definitely assualt as she was a child and unable to consent, the first time she was coerced by Dahvie she found him to be “playful and really friendly.” This second encounter she found he vibe to be really off. He sat uncomfortably close to her.

According to Ellie, Dahvie then poured his Monster energy drink all of her chest and then licked it off. After that she says he pushed her down and took off her pants. “The rest is just there, in the air, obvious,” she says. This act made her yell really loud, which freaked him out, so he stopped.

He did coerce her to give him or@l s3x again because she had been a “tease.” After he used her for his gratification, he asked her to leave immediately after, which made her feel bad. She was still 12-years-old at the time of this alleged encounter. Dahvie Vanity was 26 or 27.

Ellie says that while she knows the number of women who have claimed to have been abused by Dahvie Vanity is over 20, she believes the true number may be over 50 or more.

After the second incident with Dahvie, which left her feeling down and used, she still continued to message Dahvie. He was super nice to her in texts but would reply back less and less. Around Christmas of that year Ellie discovered the drama surrounding Jessi Slaughter’s involvement with Dahvie, and felt jealous. She confronted Dahvie about Jessi Slaughter, and he blocked her and her mom from all social contacts.

Much like the situation with Jessi Slaughter, Dahvie Vanity released an album called Bad Blood on Ellie’s 13th birthday full of songs referencing his experiences with Ellie. Dahvie had released a diss track about Jessi Slaughter on her birthday as well.

Ellie says she knew about the song about Jessi (a.k.a. Damien) but at the time she didn’t really believe it.

The now 20-year-old Ellie feels mentally and emotionally stuck because of her traumatic experiences with Dahvie. She feels “damaged” because she believed Dahvie was in love with her and instead he used and took advantage of her.

According to Pastel Belle there were two girls who were recently in communication with Dahvie Vanity and had plans to fly out to see him after the coronavirus lockdown ends. Pastel is now talking to one of those girls, and she no longer plans to visit him. There is one other girl, as of now, that may still have plans to meet up with Dahvie soon.