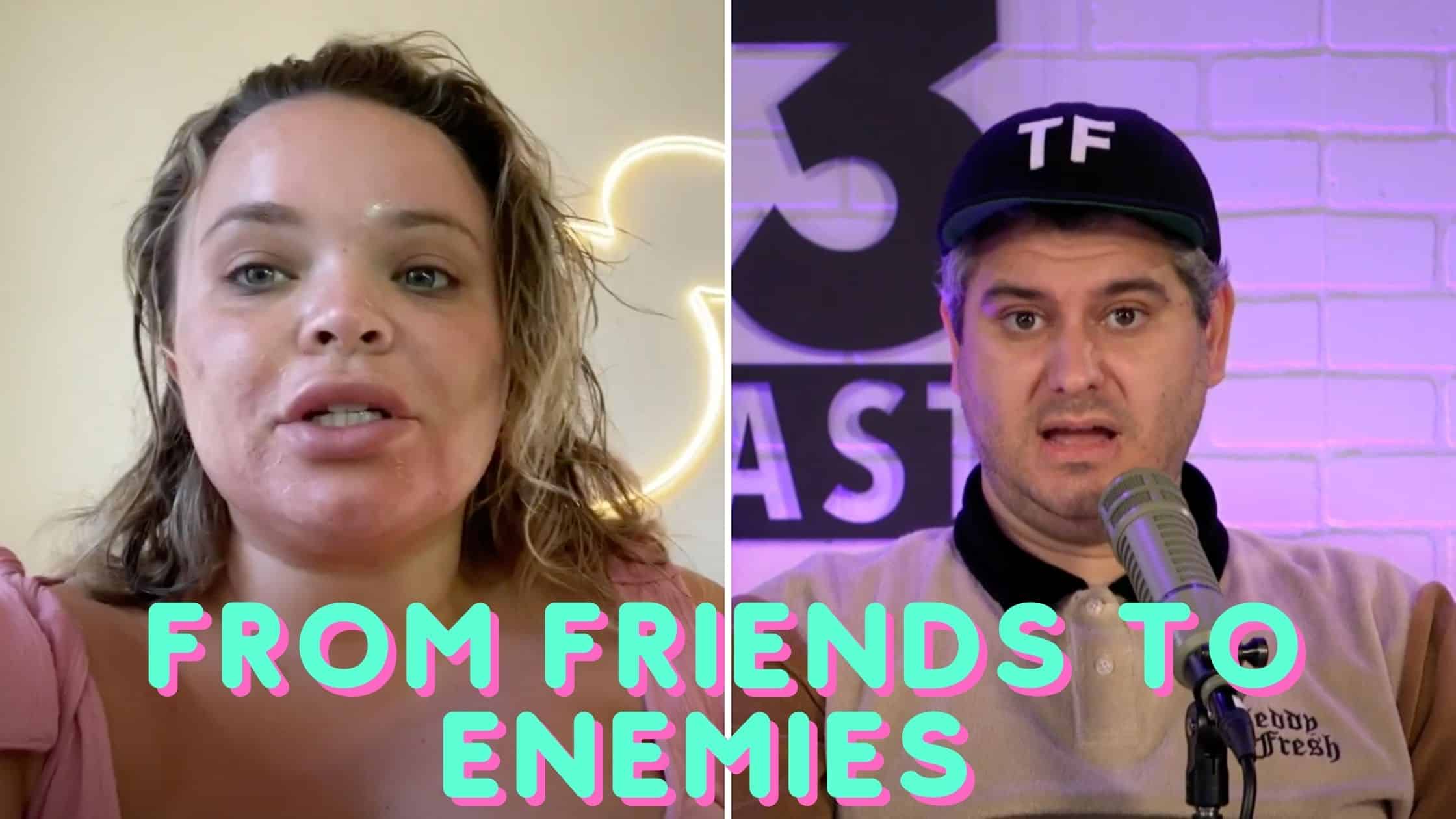 This morning Trisha released an apology video. Then, Ethan released his 46-minute response video, to which Trisha responded with a line-by-line reaction called “Ethans lies.” A 49-minute Part 1 dropped late Wednesday Trisha’s time, and a 40-minute Part 2 uploaded in the early morning hours Thursday. All videos in this current arc can be found below.

Trisha has also been prolifically tweeting her defense and rebuttals with receipts in the form of DMs and texts.

In her video from Wednesday morning titled “I’m sorry” Trisha starts off by saying that this is the first time that they’ve ever been canceled that it actually hurts because there’s “no winning” this time. They go on to explain that they defended themselves so hard on Twitter and YouTube the day before because they “really didn’t want people to think of them as a rude person.”

They apologize for quitting Frenemies and point out that quitting isn’t selfish because staying would have been the best thing for her and her business projects, like the skincare line she launched right before this drama erupted.

They express regret over quitting, state that they let everyone down, including themselves and say that they’ve never been more embarrassed than when they insulted Ethan Klein’s wife Hila Klein last October. At that time Trisha called Hila the c-word, but Hila, who is Trisha’s finacé’s sister, forgave Trisha and welcomed them into her life. “That was my lowest point in life,” Trisha says.

Trisha revealed that they’ve had a lot of low moments this past year involving drugs and her fiancé Moses, and reveals that they’ve been sober from drugs since December, and have been on drugs to treat schizophrenia since May.

One of Ethan’s major points in his video is that his staff was upset with her not because they insulted their ideas for segments, but because they wanted to fire them.

He calls Trisha one of the “funniest, most talented, most dynamic, and entertaining” people he’s ever known.

He says he doesn’t know what he could have “humanly” done to prevent this from happening and says he’s done everything possible to make Trisha comfortable and be as fair and equitable to them as possible as far as things like money and creative power. These are two of the main points of contention between them, and Ethan says he is “correcting” some things with this video.

Ethan says the day after they filmed the episode where Trisha left, they had a conversation for the first time ever about hiring new staff. Ethan says he agreed with Trisha, and offered to hire a new producer for them to work on some of their more complex ideas for the show, like ribbon dancing.

Ethan then says that the next day Trisha published a video saying that they’re quitting Frenemies, without letting Ethan know beforehand. He says the video was a complete surprise to him.

Next up is the topic of new hire Sam, who is the girlfriend of another H3 employee named Ian. Ethan explains that hiring Sam had nothing to do with Frenemies because the scope of what the entire team works on is so big. Sam is a huge fan of Trisha’s and has been working freelance with H3 for a while. She bedazzled Trisha’s Steamys award, and made the adorable Peeps driving Twinkie Rolls Royces.

He then says that from the beginning they didn’t know how long the show would go on because of Trisha’s mercurial behavior, but they put up the money to build the set, and take the risks anyway.

Trisha responded to Ethan’s question about what he could have “humanly done” by saying that they’ve been thinking more about the situation by saying he could have not aired the episode. Trisha then says they told Ethan to “put it out in its entirety,” but then qualifies that “as you know I don’t make the best decisions.”

She then argues that Ethan should not have published the episode to protect his employees. They then point out that the episode was released early to their channel members, and it received a lot of backlash. The pair were scheduled to film a vlog for the next day, but that was canceled because crew no longer wanted to film with Trisha. They then made their video stating they would be leaving the podcast after they received this message about not filming for the vlog.

The next point Trisha addresses is that Ethan says he found out Trisha was quitting via their video announcing their departure. Trisha says she told him on “two occasions” before she published her video. She then reads text messages where Ethan cancels filming for the vlog because of the crew feels hurt by what she said. Trisha then clarifies that when they called a segment stupid they thought she was addressing only Ethan at that time, and didn’t realize it would insult the entire team.

After Trisha learned that the crew did not want to film the vlog that day, they decided it was best if they “ended it.”

Trisha then argued that they value “staff on my productions, on music videos, my hair and makeup everyday, whether it’s hair and makeup people, editors, my skincare, my clothing, people I work with, I respect them more than anybody.” They go on to say that this respect for workers is what led her to think they should never go back, since they always wish to treat the staff well.

As for Sam being Trisha’s fan, Trisha is generally against hiring fans because they can take things very personally. Trisha says they have seen this happen many times with hiring fans.

Trisha says that Ethan told Trisha that they should hire Sam, but they didn’t think it would be a good fit. Trisha reveals they wish they had hired their sister Kalli to assist with things they needed for the show.

Trisha says she does not remember ever saying they wanted a whole new crew. They do remember asking for a camera guy, and thought maybe Moses could be a camera guy.

As for wanting a new space, Trisha explains that they don’t feel comfortable going into Ethan’s space for their show, so it would be nice to use some of the 5% of the revenue they take for production costs to get a space specifically for Frenemies.

Trisha has a lot of experience with sets because they shoot their own music videos, so they wanted to maybe build a new set because the podcast has grown so much.

Trisha reveals that the money H3 put up for the show to build the initial set was $37,000.

Trisha is emphatic that they don’t remember telling Ethan they wanted to fire everyone. She claims Ethan is deflecting Trisha’s problem with him onto the crew. They say this is a “bold-faced lie” and it makes them lose respect for Ethan.

Trisha followed this video with four more videos, and a few Tik Toks.

It seems like Ethan’s saying that Trisha wanted to “fire everyone” might have arisen from a misunderstanding or miscommunication between them. All of this beef would probably best been settled in a business meeting with lawyers to draw up contracts and clarify any misunderstandings between than about money, accounting, and creative control.

Is Jake Paul a sociopath? Shane Dawson goes inside THE MIND OF JAKE PAUL