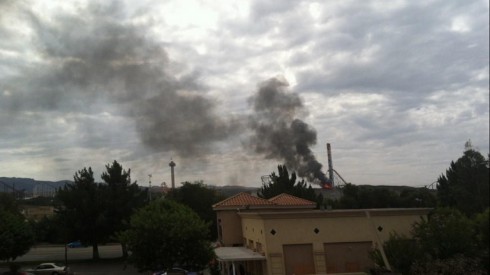 Colossus, one of the most iconic wooden roller coasters in the world and a major attraction at Six Flags Magic Mountain in Southern California, caught fire yesterday.

A portion of the coaster–the highest peak–collapsed as a result of the fire.

Twitter users posted pictures of a column of smoke rising from the coaster’s frame.

By 1:30 in the afternoon, the Santa Clarita Fire Department had arrived, and a cadre of trucks were battling the flames.

In a statement, the theme park said “There are no injuries and the fire is contained. Colossus is currently undergoing a transformation and has been closed since Aug. 17.”

The coaster is undergoing a long-term renovation: the park is turning it into a hybrid coaster called “Twisted Colossus.”

It’s not yet clear what started the fire. Park employees had been disassembling the peak using “heat equipment” when the fire broke out, according to Magic Mountain’s statement.

There’s a silver lining, though: Apparently the fire will not delay the opening of “Twisted Colossus,” which is expected to happen in the spring.

And, as the park was closed on Monday, there were no injuries.

Hopefully the park will not start using heat equipment to speed up all of its renovations.