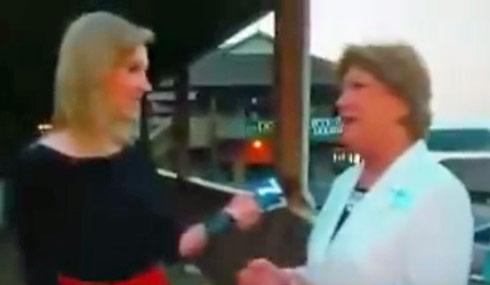 A terrifying scene unfolded this morning as shots were fired during a live report by WDBJ7 news out of Roanoke, Virginia.

According to a report via Roanaoke.com, law enforcement officials are searching for a suspect after multiple shots were fired near Smith Mountain Lake.

WUSA9 is reporting that three people were hurt and that area schools have been placed on lock down during this active shooter situation.

UPDATE: It has been confirmed that reporter Alison Parker and photographer Adam Ward died shortly after the shooting. We have removed the embedded video taken from the live airing this morning.

Chris Hurst, Alison Parker’s boyfriend, has penned a loving tribute to both Ward and Parker. Of his relationship with Parker, Hurst says “We were together almost nine months. It was the best nine months of our lives. We wanted to get married. We just celebrated her 24th birthday. She was the most radiant woman I ever met. And for some reason she loved me back.” You can read the full tribute here.