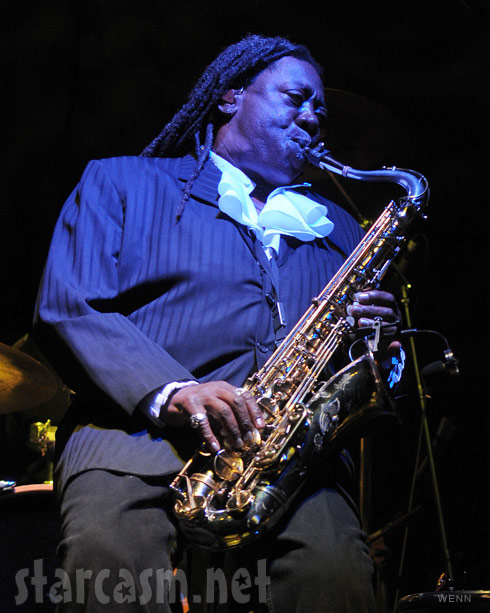 E Street Band saxophone player Clarence Clemons, 69, has reportedly suffered from a stroke and is “seriously ill” according to Showbiz411.com.

According to the site the stroke occured at Clarence Clemons’ Florida home, but no more details are known at this time.

UPDATE – Backstreets.com has gotten some more information and reports that Clarence did suffer a massive stroke and after undergoing two brain surgeries Clarence was paralyzed on his left side and in a fight for his life. But, a close friend tells the site that The Big Man is making a miraculous recovery! From Backstreets:

“Yesterday, it did not look good at all. Today… miracles are happening. His vital signs are improving. He’s responsive. His eyes are welling up when we’re talking to him. He was paralyzed on his left side, but now he’s squeezing with his left hand. This is the best news we’ve heard since [the stroke] happened — it’s nothing short of miraculous. The next five days will still be critical. But he’s a fighter.”

One night we were playing in Asbury Park. I’d heard The Bruce Springsteen Band was nearby at a club called The Student Prince and on a break between sets I walked over there. On-stage, Bruce used to tell different versions of this story but I’m a Baptist, remember, so this is the truth. A rainy, windy night it was, and when I opened the door the whole thing flew off its hinges and blew away down the street. The band were on-stage, but staring at me framed in the doorway. And maybe that did make Bruce a little nervous because I just said, “I want to play with your band,” and he said, “Sure, you do anything you want.” The first song we did was an early version of “Spirit In The Night”. Bruce and I looked at each other and didn’t say anything, we just knew. We knew we were the missing links in each other’s lives. He was what I’d been searching for. In one way he was just a scrawny little kid. But he was a visionary. He wanted to follow his dream. So from then on I was part of history.

The 6ft-4in Clemons has had a long list of health problems, telling Rolling Stone in a recent interview that he had been through spinal fusion surgery and had both his hips and knees replaced. The surgeries had a big impact on his ability to perform and he told the magazine, “That last tour was hell.”

I remember the momentous occasion from numerous bootleg recordings in which Bruce Springsteen would retell the mythical encounter with a fearful tone, saying this monolithic man in white was coming toward him through a thunderstorm, “walking like there was no wind, no rain…”

Here’s the story from Bruce himself at his legendary concert at The Main Point in Bryn Mawr, Pennsylvania on February 5/1975. (His narrative kicks in right about the 1:48 mark.)

And here’s part 2 just in case you were hooked after part 1:

Clarence’s horn helped define Bruce’s sound on soooooooo many classic recordings ranging from a spine-tingling epic solo on Jungleland to raucous juke joint rockers like Sherry Darling. But I suppose my favorite Clarence Clemons track is “10th Avenue Freeze Out,” not just because of his great horn play but because of the classic rock-as-weapon-of-mass-destruction line, “When Scooter and The Big Man bust this city in half!”

Get well soon Big Man. Your horn was a huge part of the electricity that shocked my bewildered childish self into adulthood and I will forever be indebted to you for that.