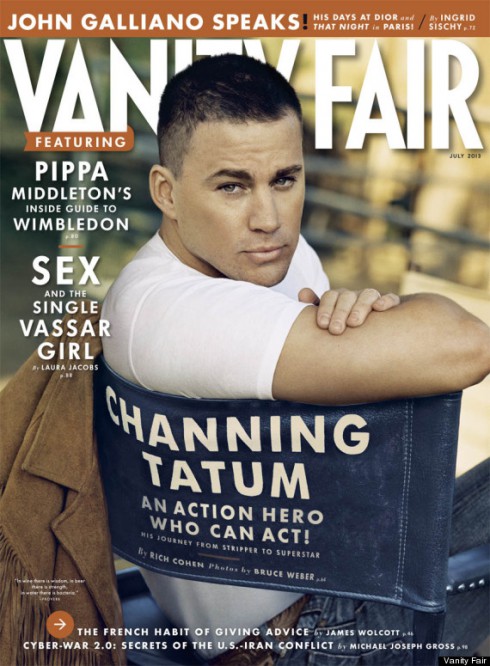 Channing Tatum (aka the Sexiest Man Alive) and his wife Jenna Dewan-Tatum welcomed a baby girl over the weekend in London where Channing is currently filming a new movie. Since the birth news, fans have been eagerly waiting the announcement of the little Tatum tot’s name — which was revealed today! Plus, in the upcoming issue of Vanity Fair, Channing opens up about all things fatherhood. But first, the name…

“Jenna Dewan-Tatum and Channing Tatum are thrilled to announce the birth of their daughter, Everly Tatum, who was born on May 31st in London,” Channing’s official website announced. “Sending love and light to Chan, Jenna and Ms. Everly!”

“I don’t think you can prepare. It’s a bit of a freestyle,” Channing explains in Vanity Fair‘s July 2013 issue of the journey into becoming a father.

Channing says his own parents “weren’t perfect,” but that it has actually helped him become the father he wants to be. “I don’t know anyone who did have perfect parents,” Channing admits. “It’s provided me with lessons I’ll try to improve upon when I’m up to bat. I’m just going to be a good friend to my kid. One thing I definitely want to change is that whole ‘I don’t want you to make the same mistakes’ mentality. My dad didn’t have much money growing up; he didn’t have much education. He forced that on me, and I didn’t want it.” 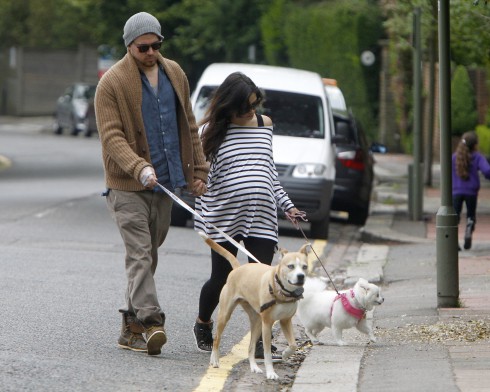 ^ Channing and Jenna walk their two dogs in London just hours before Jenna gave birth to daughter Everly on May 31, 2013. (Photo: WENN.com)

The pressure of having to get an education was tough for Channing, especially since he struggled with a learning disability. “I [still] read so slow,” Channing says. “If I have a script I’m going to read it five times slower than any other actor, but I’ll be able to tell you everything in it.”

When he was a kid, Channing was medicated for his issues but wishes he hadn’t been. “I did better at school when I was on it, but it made me a zombie,” he explains. “You become obsessive. The more you do, the less it works. For a time, it would work well. Then it worked less and my pain was more. I would go through wild bouts of depression, horrible comedowns. I understand why kids kill themselves. I absolutely do. You feel terrible. You feel soul-less.”

While Channing clarified that he does believe some people do need medication, he says he would never put little Everly on medication for a learning disability. “I’d never do it to my child,” he states.

Another hot topic during Channing’s interview was Justin Bieber’s recent troubles. “I worry about Bieber, man,” Channing says. “That kid’s wildly talented. I hope he doesn’t fall down into the usual ways of young kids because it’s so hard for someone to be responsible when they’re not asked to be. We’re not asked to do things ourselves.”

Why are Michael Jackson’s children Prince and Paris estranged from their mother?