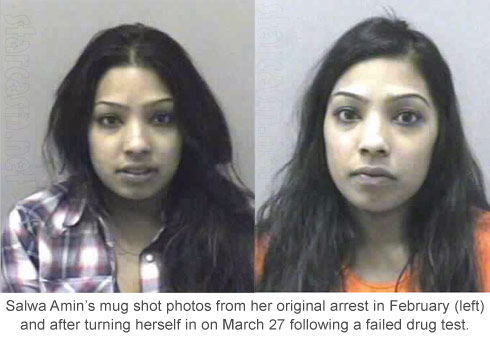 Former Buckwild star Salwa Amin was arrested on February 11 and charged with drug possession with the intent to sell after being found with two other suspects in a shed in West Virginia along with three packages of heroin and Oxycodone in her purse. The 24-year-old was later released, but while awaiting her trial date she tested positive for opiates and was forced to return to jail on March 27 to await her court date.

In April Salwa gave a lengthy video interview from behind bars to a local TV station in which she was very open and honest about her addiction to drugs, saying at the time that when she failed her drug test she was on a waiting list for a bed at a recovery center. “Obviously when I first got here the first thing I was trying to do was get out,” Salwa said before revealing that her priorities have since changed, and her number one priority now is getting sober.

Thanks to a court ruling on Monday, Salwa will be getting some help obtaining that goal. Salwa was ordered to an inpatient treatment facility to deal with her addiction, according to TMZ. It is unknown how long she will be in treatment, but she will return to jail once she is done and await her court date for the original drug charges, which has yet to be set.

If you haven’t seen it, you should really watch Salwa’s jailhouse interview — it’s about as honest and sincere a clip as you’ll see. Salwa also recorded a video of herself in the car with her dad on the way to turn herself in that is quite moving — it is included in the post linked above.

MAPS: Where was MTV’s Buckwild filmed in West Virginia?