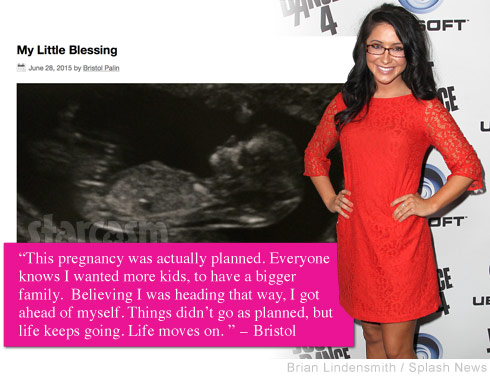 Bristol Palin, who famously worked with the Candie’s Foundation to educate young men and women about the “devastating consequences of teen pregnancy and parenthood,” revealed last week that she is currently pregnant with her second child. The announcement comes a little over a month after Bristol broke off her engagement with fiance Dakota Meyer. Her announcement has drawn a good deal of criticism; today, Bristol took to her blog to respond to some of those critics, as well as share a sonogram, clear up her relationship with the Candie’s Foundation, and clarify her stance on abortion.

The major point that Bristol wants to clear up is that the pregnancy was not an accident. “I made a mistake, but it’s not the mistake all these giddy a$$holes have loved to assume,” Bristol writes. “This pregnancy was actually planned.”

She seemingly confirms what many have speculated: the baby is Dakota’s, and the couple assumed they would be together as husband and wife to raise the child. “Everyone knows I wanted more kids, to have a bigger family,” Bristol says. “Believing I was heading that way, I got ahead of myself. Things didn’t go as planned, but life keeps going. Life moves on.”

Bristol then iterates emphatically that even though things did not work out as planned, she sees the child as a mistake: “I do not regret this baby. This baby is not a disappointment, and I cannot wait to be a mom times two. Tripp is going to make the best big brother!!”

And, as far as abortion goes, Bristol has always been pro-life and wants us to know that that was never an option for her:

When I realized I was pregnant, I knew I would be completely crucified. But I never even thought of aborting this child, NO MATTER WHAT THE CIRCUMSTANCE. (Sorry to the ghouls at Gawker, who said this baby is an argument FOR abortion. Not happening.)

I am pregnant. This is not the ideal situation, but life is important even if it’s not in the most absolute ideal circumstance. This is more confirmation on what I’ve always stood for. I’ve always been pro-life and I am standing for life now.

Prior to today’s entry, Bristol posted this photo and caption on Instagram with a similar message to her detractors:

update: this is still how much I care about anything negative .. #prolife God is good, happy Friday!!

As far as her connection to the Candie’s Foundation, Bristol points out that the foundation addresses teen pregnancy — which she had experience with — but that she’s no longer a teenager. “They are a teen pregnancy prevention non-profit and I worked for them when I was 18 and 19 — when I could share first hand the challenges of being a teen mother,” Bristol says. “However, I’m not 17 anymore, I am 24. I’ve been employed at the same doctor’s office for over six years now; I own a home; I have a well-rounded, beautiful son.” 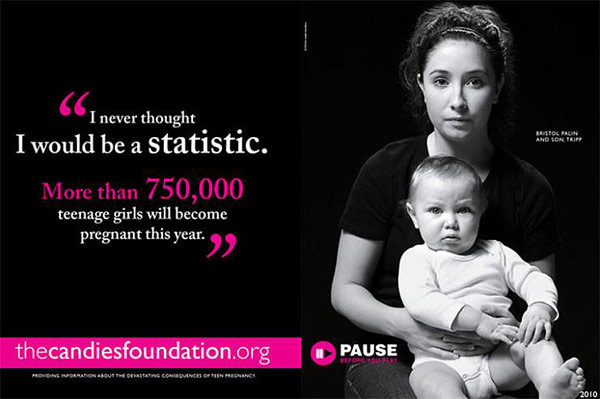 The Candie’s Foundation has since come out in support of Bristol. “In 2011, when she was just 19, Bristol Palin was enormously helpful to The Candie’s Foundation in our mission to educate teenagers about the devastating consequences of teen pregnancy,” the organization tweeted on Friday. “Her courage, while still a teen herself, to admit her mistakes so publicly in an effort to help others was remarkably brave. Today, at 24, we can only offer our support to Bristol and her family and respect her request for privacy.”

Meanwhile, Grandma-to-be Sarah Palin has remained publicly silent on Bristol’s pregnancy, although she has spoken out over the last couple days on some of the political headlines including the Supreme Court’s recent rulings and a battle brewing in Arkansas over the “An Appeal To Heaven” flag.