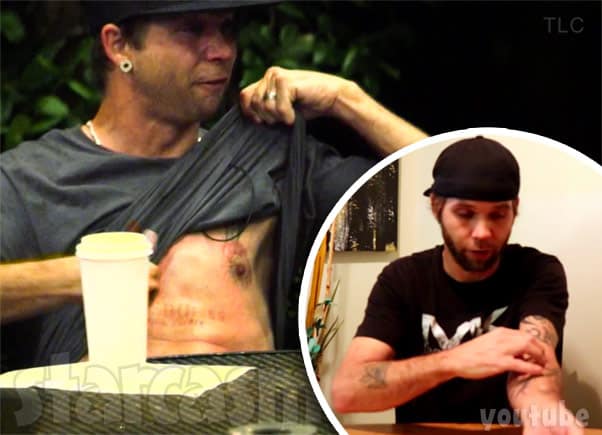 Breaking Amish and Return To Amish star Jeremiah Raber recently shared a YouTube video titled “My Dark Secret Revealed…” in which he admits that he used to cut himself on his arm and his chest. He says in the clip that he has difficulty crying, and that cutting himself was his way of relieving pain from built up pressure.

Jeremiah begins by stating that cutting is something that he “used to do” and that he “just recently quit.” He points out that fans of the show saw on the last season of Return To Amish that he had cuts on his chest. In case you missed it, he is referencing a scene with co-star Shelly in which he is talking to her about being adopted. In the episode, titled “Jeremiah’s Dark Past,” he reveals to Shelly that he actually cut the word “worthless” into his chest after meeting with his birth family for the first time, because of how terrible they made him feel. (You can see a screen shot from the scene in the photo at the top of this post.)

In his YouTube video, Jeremiah continues by pointing out that he avoids filming without his shirt, and he also says that he tries to keep his left forearm off camera because that is where he would frequently cut himself in addition to his chest. (He also mentions cigarette burn scars.) Jeremiah adds that the scars on his left forearm are a major reason for why he has so many tattoos there.

“So many people love to judge when they hear or they see that somebody is a cutter,” Jeremiah says. “That is the worst thing you can ever do, and I will tell you why. You probably can cry with tears very easily. Me, on the other hand, I can’t cry that easy with tears. And there’s other people that can’t cry at all. I mean, I’ll rephrase that, they can cry, but they don’t have tears, so there is no way for us to relieve the pain, the pressure that is building up, except for with a cut.”

Jeremiah then explains that “when we cut, that blood is actually our tears, and it is a feeling of relief.”

The reality star is quick to defend himself and other cutters against claims that they do it for attention. “No, it is not for attention,” he says. “You know, so many people say it’s just for attention. Just quit,” he insists, “it’s not that simple. And please, do not judge somebody who you know that cuts. That is our way of relieving the pain.”

He says that the best thing to do is to sit down and have a conversation with the person. He recommends not even bringing up the topic of cutting because “that will literally put a wall.”

Jeremiah concludes his video by reminding other cutters that they are not alone. “There’s a lot of people that do, so don’t feel like you’re different,” he says. “Just never give up. There’s always hope. Keep looking forward and that’s the only way to go.”