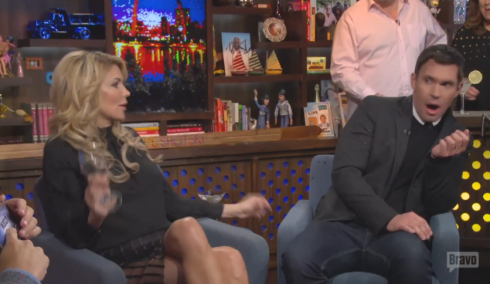 Brandi Glanville appeared on Watch What Happens Live last night after a difficult episode of Real Housewives of Beverly Hills where she threw a glass of wine on cast member Eileen Davidson. When Andy Cohen asked her about the incident, she made a joke about how wasting wine was “alcohol abuse,” but then seemed genuinely sorry. Fellow guest Jeff Lewis defended her contrition, saying she’d been profusely apologizing about the incident, but it turns out her wine throwing ways had not been curbed.

Although Jeff defended Brandi, he also insulted her several times. When she offered to donate her eggs to him, he questioned whether or not they would be “scrambled,” and when a caller asked if Brandi would run her fingers through Jeff’s hair to prove if it was real, he asked if he could get an STD from that. During the next segment, Brandi referred back to the STD comment, and then threw her wine in Jeff’s face, saying that it would help her run her fingers through his hair and would also kill any STD germs.

“Alcohol kills everything,” Brandi said, while Andy Cohen quipped, “Including feelings.” A shocked Jeff said “I can’t believe I defended you.” Brandi said that she was incredibly upset about Jeff’s comment about getting an STD from her, (something she wrote about in her book.) When Brandi broke down into tears, Jeff apologized for hurting her feelings. She turned around in her chair, but finally warmed up to Jeff after he kept apologizing, and offered her to throw another drink in his face.

Brandi apologized to Eileen and gave her a necklace, but it’s still unclear why she threw the wine in the first place. Brandi did say that she was riled up after hearing Eileen’s romantic story about how she and her current husband fell in love while married to other people. This story was similar to Brandi’s ex leaving her for LeAnn Rimes, who was also married when they fell in love. “Still don’t trust her, but I’m willing to accept her apology,” Eileen said about the incident. At a party Yolanda Foster threw, Brandi insulted the size of Babyface’s wife’s ring, and sat on Yolanda’s husband’s lap for a brief moment, making David look incredibly uncomfortable. “If that’s not white trash, I don’t know what is,” Lisa Rinna commented about Brandi’s behavior.

UPDATE: Brandi posted on her Facebook page that her tiff with Jeff was planned as a prank on Andy Cohen:

Guys! Jeff Lewis & I were joking! it was a PRANK on Andy.
We are good friends, I turned around cuz I couldn’t stop LAUGHING.
Watch the AFTER SHOW! I told you earlier, anything can happen