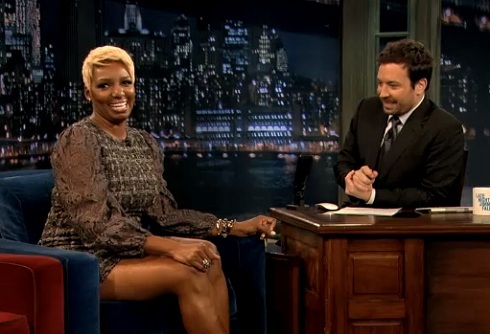 NeNe Leakes and her ex-husband Gregg Leakes are officially engaged. On New Year’s Eve, the Real Housewives of Atlanta star had tweeted fans some pretty telling messages including “My answer was yes,” but up until last night, she hadn’t exactly confirmed the engagement.

During her appearance on Late Night With Jimmy Fallon, NeNe walked through her romantic night with Gregg, and more importantly, discussed how their night ended. “A little after midnight, I was asked this beautiful question: ‘Will you marry me — again?’” Nene revealed. “And?” asked Jimmy. “Yes!” NeNe confirmed.

NeNe and Gregg had gotten divorced in 2011 after fifteen years of marriage but were rumored to have gotten back together by early 2012. Then, in November, NeNe finally confirmed that she and Gregg were in fact giving their relationship another try.

“I have a ‘new normal.’ I got divorced, and I’m dating my ex-husband,” NeNe explained at the time, “I’ve always loved Gregg, so hopefully, we will make it work this time.”

While the reason behind their initial split hasn’t exactly been revealed, NeNe has hinted that her booming career was a leading cause in their split. NeNe recently became bi-costal, with homes in both Atlanta and Los Angeles, in order to better maintain her gigs on RHOA and The New Normal.

On Monday, NeNe and Gregg will be appearing together on The Wendy Williams Show where they will certainly discuss their engagement and plans for the future.